iRobot's 'throwable' 110 FirstLook bot gets drafted into the military (video) 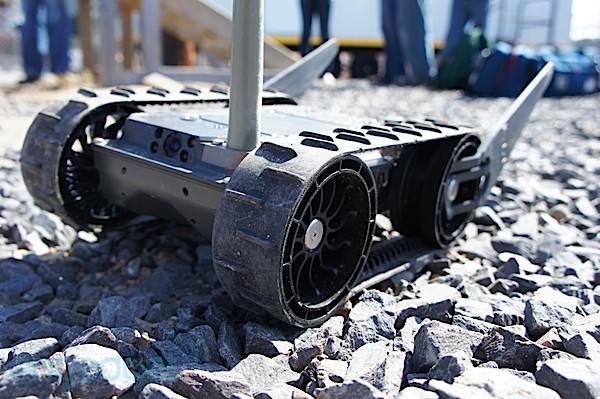 iRobot's Bedford, Massachusetts headquarters is literally crawling (well, rolling) with robots of all shapes and sizes, from friendlier household fare like Scoobas and Roombas, to the 450-pound Warrior battlefield 'bot, which patrols the perimeter, looking for mock IEDs. The highlight of our trip this week, however, had to be the time we spent with 110 FirstLook. Sure, durability is job number one, when you're building products for the military, but the plucky little robot takes things to a whole new level.

At five pounds, you can pick the thing up and toss it -- in fact, the company encourages such action. The FirstLook was built to be thrown into dangerous areas, and it's rugged enough to smash through plate glass windows to get there. The 'bot has a patch of skateboard-like grip tape on its top, opposite the bendable antenna, so you can easily grab it with a single hand. You toss the FirstLook side arm, like a frisbee, and no matter what side it lands on, the rubber treads will cushion the blow a bit. If it happens to hit the ground upside down (with the antenna on the bottom), the triangle wings on either side can be slowly extended in either direction to right the robot. Same goes for when it bounces down a flight of stairs, unharmed. 
FirstLook gets its name from the four cameras that dot its sides, allowing soldiers to do reconnaissance from a safe distance -- up to a couple hundred meters (though one iRobot employee told us that the company has gotten up to 500 meters unobstructed). You can view all camera angles simultaneously using the large display on the robot's beefy remote control.

The remote has a small joystick to the left of the display. It's really like playing a video game -- we jokingly mentioned that we'd been training for it all our lives with our console games, and the iRobot rep had to agree. Anyone who's spent any time sat in front of a TV, playing Nintendo can start driving it immediately. There are two buttons on the top of the controller for righting the robot, a menu button and a one that alternates FirstLook's speed. The robot can cruise up to three miles per hour -- it was really quite zippy rolling over the rocky terrain of iRobot's testing ground.

Part of us sort of wishes that there were a consumer version of FirstLook we could take home -- and heck, with the company's recent reorg, strides made on the well-funded military side of the company will likely have even more influence on its consumer-facing products. In the meantime however, it will certainly go a ways toward keeping soldiers out of harm's way.
In this article: 110 firstlook, 110Firstlook, battle, bomb, firstlook, hands-on, irobot, military, rc, recon, Reconnaissance, remote, remote control, RemoteControl, robot, robotics, video
All products recommended by Engadget are selected by our editorial team, independent of our parent company. Some of our stories include affiliate links. If you buy something through one of these links, we may earn an affiliate commission.
Share
Tweet
Share