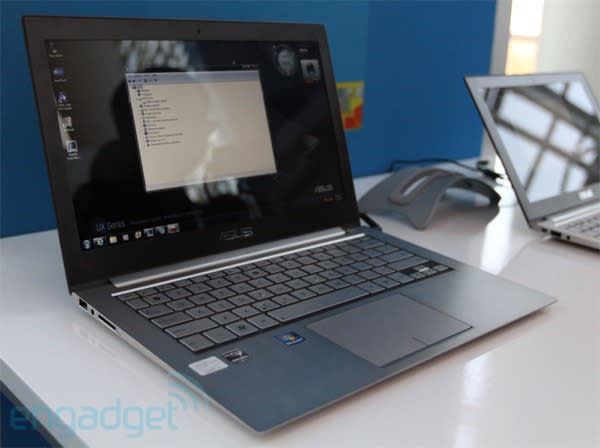 Bad news if you've recently acquired either of ASUS' gorgeous Zenbooks, as alleged spec sheets for their successors have just surfaced. According to documents obtained by The Verge, the upcoming refresh will be significant for both the 11.6-inch UX21 and 13.3-inch UX31. Dubbed the UX21A and UX31A, respectively, both supposedly make do with Ivy Bridge silicon (spanning from Core i3s all the way to i7s) which also means a free update to Intel's HD Graphics 4000. Brawny internals aside, most interesting are the optional 1080p IPS panels on both, which should be particularly gorgeous and pixel-dense in the smaller 11.6-inch beaut. Also rumored is the inclusion of WiDi, alongside backlit keyboard decks -- all stuffed into the same svelte footprints as their predecessors. Naturally, there's no word on when they'll land, but you'll know more when we do. Catch the full spill at the source link below.
In this article: 1080p, 1080p display, 1080pDisplay, 11.6-inch, 13.3-inch, asus, asus ux21, asus ux21a, asus ux31, asus ux31a, AsusUx21, AsusUx21a, AsusUx31, AsusUx31a, laptops, leak, pixels, rumor, ultrabook, ultrabooks, update, ux21, ux21a, ux31, ux31a
All products recommended by Engadget are selected by our editorial team, independent of our parent company. Some of our stories include affiliate links. If you buy something through one of these links, we may earn an affiliate commission.
Share
Tweet
Share