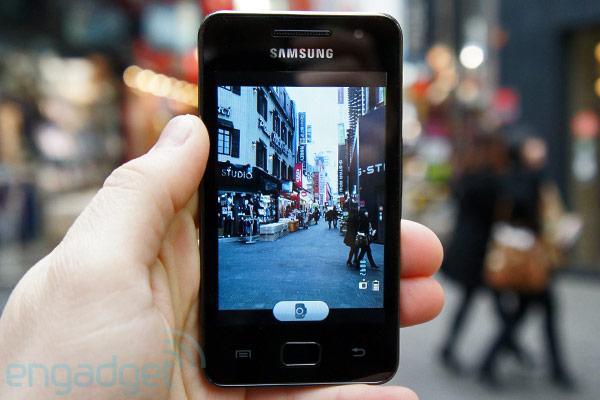 If you were paying very close attention during Samsung's IFA announcements last year, you may have caught wind of a 3.6-inch PMP, fittingly called the Galaxy S WiFi 3.6. Now, Samsung has confirmed that this elusive entry-level Gingerbread handheld will finally be making its way to North America, with a 3.6-inch 800 x 480-pixel display and 1GHz Hummingbird processor in tow. There's no question that this isn't going to be a must-have gadget for power users, but for children and those new to Android or portable media players, the 3.6 will suit just fine. It's still a capable device, though on a more modest scale than pricier models -- there's a rear-facing 2-megapixel camera with a VGA snapper up front, a 1500mAh removable battery, a microSD slot for memory expansion, micro-USB and headphone ports on the bottom, and a power button and volume rocker on the side.

We had a chance to go hands-on with the 3.6 ahead of its U.S. launch during a visit to Samsung HQ in South Korea. The first thing we noticed is its size -- the compact design and light weight make single-handed operation quite feasible, even for those with smaller hands. The relatively high-res display (given the size) is of the LCD variety, as with other Galaxy Players, though with the same amount of screen real estate as larger devices, you should have no problem using the PMP for occasional email and basic web-browsing. Surprisingly, we also didn't have any issue using the keyboard, even in portrait mode with fairly stocky fingers. Navigation was noticeably sluggish compared to higher-end Samsung Galaxy devices, but not out of the ordinary for a mid-tier gadget. We wouldn't necessarily recommend purchasing the Galaxy S WiFi 3.6 if your everyday device has a large, gorgeous AMOLED display and plenty of processing power under the hood, but if you're looking for a PMP to compliment your prepaid feature phone, this budget offering should fit the bill. We're still awaiting confirmation of U.S. pricing and availability, though it wouldn't be unreasonable to expect it to land within the $150-200 range. Jump past the break for our video hands-on.