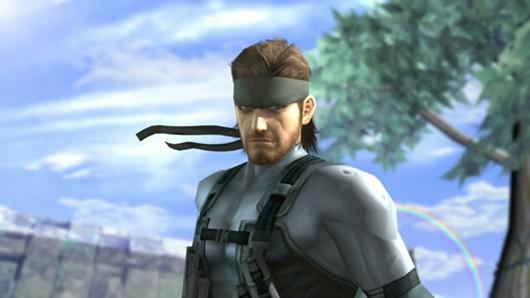 Metal Gear creator Hideo Kojima and Sora Ltd. head Masahiro Sakurai are friends. So when Hideo Kojima wanted one of his most famous characters, Solid Snake, put into Sakurai's fighting series, Super Smash Bros., all the two had to do was talk. "When I was developing Super Smash Bros. Melee for GameCube, Hideo Kojima contacted me and practically begged me to put him in there, but at that time we were deep in dev and it was too late," Sakurai told Kotaku back in 2006. Snake didn't end up in Melee, but did appear in the Wii's iteration of Super Smash Bros.: Brawl.

So what drove Kojima to "practically beg" Sakurai to get Snake in the game? "My child likes Super Smash Bros., so we play it a lot together. And he told me that there's no character that you made in that game," Hideo Kojima told a group of interviewers late last week ahead of the Smithsonian's "The Art of Videogames" exhibit. Aside from his son's pleading, Kojima pointed to Metal Gear's low profile on Nintendo consoles as a second reason.

"As you know, we did make Twin Snakes, but generally speaking, there hasn't been a lot of Metal Gear on Nintendo platforms. So from that perspective, I thought it was a good way to expose younger people to this character, Snake," he said. It must be working, as Snake is one of Brawl's most popular characters.
In this article: guest-character, hal-laboratory, hal-labs, hideo-kojima, masahiro-sakurai, nintendo, sora-ltd, Super-Smash-Bros-Brawl, wii
All products recommended by Engadget are selected by our editorial team, independent of our parent company. Some of our stories include affiliate links. If you buy something through one of these links, we may earn an affiliate commission.