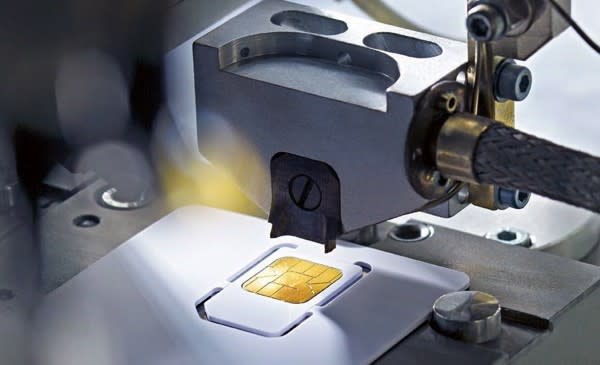 Giesecke & Devrient's nano-SIM design is fueling quite the standards battle over in Europe, with Apple sitting in one corner, and the troika of Motorola, Nokia and RIM looming in the other. That's according to the Financial Times, which reports today that Cupertino is leading a charge to push its own nano-SIM proposal through Europe's standards body, ETSI, much to the chagrin of its competitors. According to FT's sources, Apple's version of the nano-SIM would call for a "drawer" to protect it, much like the designs already featured in the iPhone and iPad. Though the standard would be available to all manufacturers under license, there's a lingering fear that Apple may eventually own all the patents pertaining to its proposal. Plus, its rivals would have to re-engineer their handsets to meet Apple's proposed design, even though Nokia claims its solution offers "significant technical advantages." ETSI is slated to vote on the proposals next week, but FT claims that the company has already garnered support from most of Europe's providers. Just to be sure, though, Cupertino is applying to become the largest voting member at ETSI, and is looking to register a full six European subsidies under its name. Each subsidy can wield up to 45 votes, meaning that if approved, Apple would overtake Nokia as the organization's largest voting body. Nokia, for its part, has filed a document in protest.
In this article: apple, ETSI, europe, law, legal, mobilepostcross, motorola, motorola mobility, MotorolaMobility, nano sim, nano-sim, NanoSim, nokia, RIM, sim, standard
All products recommended by Engadget are selected by our editorial team, independent of our parent company. Some of our stories include affiliate links. If you buy something through one of these links, we may earn an affiliate commission.
Share
Tweet
Share