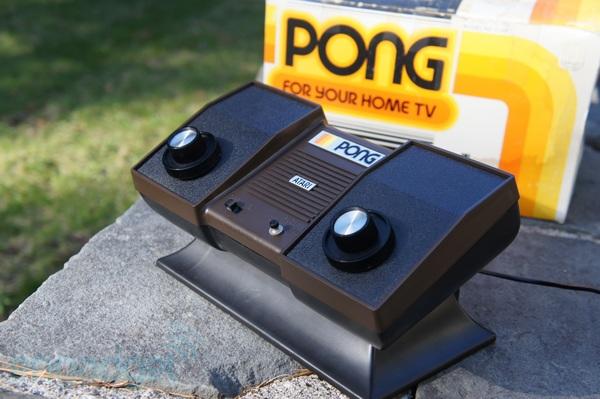 Multiplayer gaming today has become an inherently and bewilderingly antisocial affair. You grab a controller, take up as much space as possible on your couch at home, then connect to some random game hosted by some random server filled with some random people with whom you do your damnedest to fill with some collection of lead thrown from some assortment of futuristic weaponry. Along the way, you'll be taunted, insulted and, if you're playing a Halo game, quite possibly physically shamed.

Back in 1976, of course, things were a bit different. Pong was the height of at-home multiplayer gaming. Two dials, one button and one switch is all you had, and with your opponent sitting in extremely close proximity to you, chances are most of the heckling would be the good-natured variety. It is a vastly simplified experience versus what we have today, but in some ways a vastly superior one. Click on through to see why. Stepping back in time 36 years, one would expect for things to be rather simpler than they are today, and in that regard this Atari-made Pong console does not disappoint. New, it cost just under $100 (enough to buy an Xbox 360 and a Nintendo Wii by today's dollars), but the bargain-hunting first owner of the unit we reviewed paid just $79.95, according to the price tag that's still stuck on here. This is actually the second-generation of Pong hardware made available to consumers (aka Home Pong or the C-100), though the first iteration, released in 1975, was sold exclusively through Sears Sporting Goods. It was labeled Tele-Games Pong. Other than different colored plastics and labeling, the two units are identical.

As would become something of a trademark for Atari, this edition of Pong sports a brown and black color combination that clearly establishes its pedigree as a '70s icon.

And what color are the plastics? As would become something of a trademark for Atari, this edition of Pong sports a brown and black color combination that clearly establishes its pedigree as a '70s icon. It sits up on a large base of black plastic, elevating it up off of a table or lap while a little rubber nub at each corner keeps the whole unit from sliding around too much in frantic two-player matches.

It's only the very top that's actually brown, slightly lighter plastics capping and wrapping around the black. There's no faux-woodgrain here (as would later make an appearance on consoles like the Atari 2600) but parts of this system have been inspired by another organic surface: leather. No, there isn't any actual hide (nor pleather for that matter), but the black plastic on the left and right sides of the top has a distinctive texture obviously imitating something that came off of a cow and went through a tannery.

It's these two raised panels that present the most important aspects of this console: the dual knobs. These are the only real controls the system has, and naturally the only real controls the game needs. Each knob is made of cheap, hard plastic, a surface that will chafe against the hands of younger gamers whose digits have known nothing but high-quality polymers and soft-touch coatings. Even so, the plastic burrs left on the edges from the injection molding process that nobody bothered to file off are a strong indicator that this thing was made to a cost.

Another hint is the bargain-basement switchgear. The power toggle is a big, mushy switch that oozes from side to side without positively engaging on either side. Next to it is an exposed metal button that is kindly labeled "PUSH START GAME." It is, we have learned, impossible to read the label on this button without slipping into a Frankenstein-like accent.

And that's it for controls, but there is one port on the back. It looks like a headphone jack but we wouldn't recommend slotting your new Lou Reed Signature Edition buds in here. This is actually where the power brick connects to the console -- if you opted to buy one. Yes, the power brick was optional, juice by default coming from four D-cell batteries that rest in the bottom and give this thing an impressive heft that its flimsy plastics could never hope to deliver.

The last detail here is the solitary tail threaded out from the top of the unit. The single coax connector is all you need to connect this to your television of choice -- which hopefully still has a coax input. That said, if you're going really retro Atari supplies, a twin-lead RF adapter with the manual GAME / TV switch that readers of a certain age will fondly remember forgetting to flip back after lengthy gaming sessions, leading to confusion the next time someone wanted to watch TV.

There's no separate audio output because all the various bleeps and bloops are generated by the console itself, coming from a speaker beneath the Atari logo. The Pong packaging helpfully clarifies that this can be attached to any size television, whether color or black and white. Trust us when we say it's better in color.

"Whoa" is a word you're likely to utter the first time you flip that power switch on a Pong console. That is, of course, assuming you turned on the TV first. You're presented with a rainbow of blocks that flow across the screen in unison, gradually shifting hue as they go. It's a surprisingly psychedelic, trippy effect that those in an altered state could probably stare at for hours.

"Solitaire" mode isn't much fun, but it is at least an incredibly effective way to verify that your chosen dominant hand is, indeed, your dominant hand.

To start the game, you press the obvious button and away you go. There's no need to select the number of players because only two are supported. Though, as a fun fact, the owner's manual suggests a "Solitaire" mode described as a way to "sharpen your game or just have fun playing Pong by yourself." In fact there is no separate mode, it's just you manning both dials and trying to keep the ball from going off either side of the screen. Yes, this is the "forever alone" gameplay mode, and while it is far from compelling, it is at least an incredibly effective way to verify that your chosen dominant hand is, indeed, your dominant hand.

Pong, then, is best served as a multiplayer game, one that you'll want to play against friends with whom you won't mind sitting in close proximity, since we're still a few years away from a console with proper remote controls. The two knobs are positioned just seven inches apart and, if both players are right-handed, you're going to have to get a bit cozy.

Start a new game and, after a few seconds, the ball (which is, of course, square) starts moving from one side to the next. The goal is to hit the ball with the paddle on your side (which is, of course, rectangular) and send it back toward the opponent. If you manage to hit the ball in the center of your paddle it'll travel straight. Catch it on either the top or the bottom and it'll careen off at an angle. Excitingly, after a few hits, the speed increases dramatically.

Should you miss the ball, your opponent scores a single point, with the winner being the first to manage 15. There are no complex rules about service to win or having to best your opponent by two points. First to 15 takes home the prize, and that prize is the exact same display of dancing blocks that you get when you turn the system on. There isn't really much of a prize, then.

Indeed, we could spend the next few paragraphs talking about what this game lacks (high scores, gameplay modes, background music, lengthy single-player campaign with multiple endings and numerous NPCs with whom you can have physical relations) but we will instead talk about what this game has, and that is fun factor.

Yes, Pong is fun. Shockingly so.

Yes, Pong is fun. Shockingly so. We've played dozens of versions of the same basic theme, including various single-player brick-breaking derivatives, many of which were far flashier than what we have here. But that doesn't change the fact that batting a cube back and forth over a dotted line (the net, according to the manual) is properly entertaining. It doesn't matter that the game can be learned in five seconds flat and mastered about a minute later. A round-robin tournament of friends here could rank right up there with a four-player match of GoldenEye -- and you won't have to worry about whether your buds are peeking at your corner of the screen.

Nintendo Virtual Boy Review
Atari's Pong Indie Developer Challenge is a real coin opportunity
Scientists set lasers on cells, end up playing Pong
In a world of hyper-competitive multi-player gaming against faceless opponents who, after killing you, only stop to take your loot, Pong feels completely alien. It is a competitive game but, when you're sitting right next to your opponent, it almost feels cooperative. It's simply rewarding to play and, should you ever have the opportunity, we'd recommend you take a moment and give it a shot.

Of course, you'll probably get bored with it in about 15 minutes and go back to fragging foes and grinding your way to your next Prestige, but that quarter of an hour even the most ADD-afflicted gamer mind will have a blast. And trust us, if you pull an original Pong console out at a party, people will remember.
In this article: atari, c-100, console, home gaming, home pong, HomeGaming, HomePong, pong, retro, retro gaming, RetroGaming, review, sears
All products recommended by Engadget are selected by our editorial team, independent of our parent company. Some of our stories include affiliate links. If you buy something through one of these links, we may earn an affiliate commission.
Share
Tweet
Share