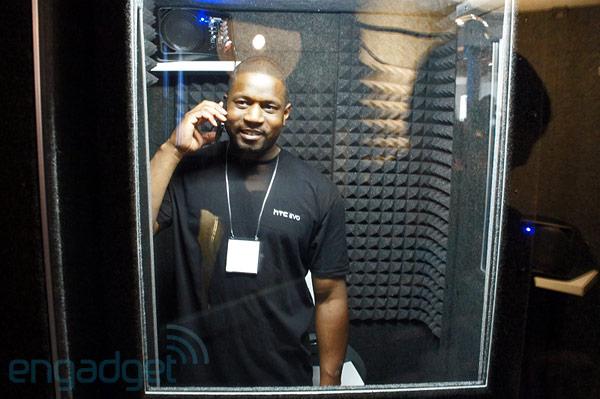 So this definitely isn't your ordinary hands-on -- there's really no way to accurately capture audio coming through the earpiece in a mobile phone -- so, well, we'll just have to use our words. Sprint's just-announced HTC EVO 4G LTE is the first device to feature what the carrier has coined "HD Voice." The smartphone uses dual microphones, along with encoders and decoders to capture and transmit your voice from one equipped device to another -- that's right, for now, you and another caller will both need to be using this specific handset, paired with compatible network access points, which Sprint will begin rolling out shortly as part of its "Network Vision." We know what you're thinking: I don't use my phone as a phone. Sprint claims otherwise, however, saying that the network will handle 500 billion voice minutes this year alone. If you happen to account for any of those calls, there's certainly no harm in sharing your spoken word in 'HD.'

We hopped into a steamy sound booth at Sprint's NYC launch event today, speaking to an employee using HD Voice on the LTE EVO. The difference was clear, especially once he turned up the "background noise" on a demo music track, which we couldn't hear at all until the handset was moved within an inch or two of the speaker -- we can only imagine how this will play out on the audibly cluttered streets of New York City, which are definitely suited more for text than voice. The HD Voice experience was the same without any background noise at all, and just as impressive. You'll of course still be susceptible to ambient noise on the listening end -- after all, we needed to be in a near-silent booth to block out the sound around. Stay tuned for more detailed impressions in our full review closer to the device's May 7th pre-order date -- we patiently await an opportunity to listen more closely.
In this article: 4G, Android, android 4.0, android phone, android phones, Android4.0, AndroidPhone, AndroidPhones, call, calling, calls, evo, evo 4g lte, Evo4gLte, Google, hands-on, HD Voice, HdVoice, htc, htc evo, htc evo 4g lte, htc one, htc sense, HTC Sense 4.0, HtcEvo, HtcEvo4gLte, HtcOne, HtcSense, HtcSense4.0, ice cream sandwich, IceCreamSandwich, ICS, impressions, lte, mobilepostcross, phone call, phone calls, PhoneCall, PhoneCalls, sense, Sense 4, sense 4.0, Sense4, Sense4.0, sprint, voice
All products recommended by Engadget are selected by our editorial team, independent of our parent company. Some of our stories include affiliate links. If you buy something through one of these links, we may earn an affiliate commission.
Share
Tweet
Share