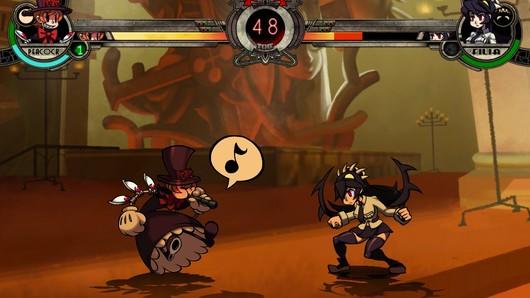 Skullgirls' previously undetermined PSN release date has been totally determined, with the game now set to launch at $14.99 in the Americas on Tuesday, April 10 – one day ahead of the XBLA release. The game's PSN launch dates in Europe, Australia and New Zealand are unfortunately still a mystery, although Wednesday's XBLA release does include those territories.

Skullgirls is also knee-deep in the tournament fighting scene and will be making appearances at several major tournaments around the country -- appropriate, considering that it's been designed specifically with serious competitive fighting in mind. This will be helpful for people who are curious about Reverge Labs' debut title, but are also strangely adverse to downloading trial versions of things. Finally, a way to support your local fighting game community and indulge your bizarre eccentricities simultaneously.
In this article: autumn-games, konami, microsoft, playstation, ps3, PSN, release-date, reverge-labs, skullgirls, xbox
All products recommended by Engadget are selected by our editorial team, independent of our parent company. Some of our stories include affiliate links. If you buy something through one of these links, we may earn an affiliate commission.