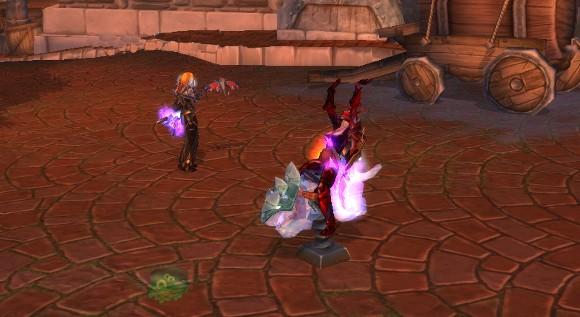 I asked recently whether people agreed with me in my dislike of the emote /spit and got an interesting yet mixed response.

A couple of responders mentioned that they'd like to see another emote in WoW -- and funny enough, I agreed with them! The amount of times I've absentmindedly typed /tongue, expecting to have my character stick their tongue out at my target ... and these commenters said they would like that included as well! I'd love that.

To be positive rather than negative, what's your favorite emote in the game? I warn you now, I will shake my head disapprovingly at anyone who says it's /spit. However, like another commenter, I'll probably type /shake and end up shaking my rear at you instead!

I reckon my favorite emote would be either /violin or /cower. I find /violin hilarious for some reason, and I enjoy the animation that goes with /cower, especially because it seems to be one of those that lasts until you move. You can /lol in the middle of a /cower, and you'll take a brief pause from cowering to laugh, then go right back to it! Simple things please simple minds, right?