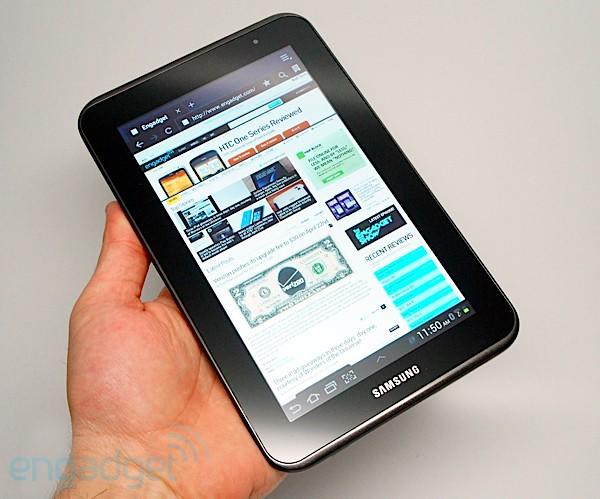 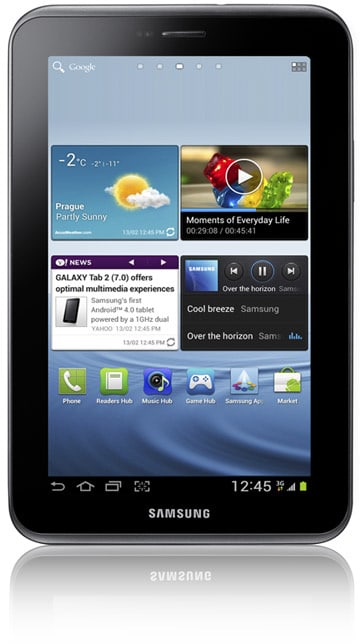 There's an age-old saying: "If a tree falls in the forest and no one's around to hear it, does it make a sound?" We're tempted to posit that question to Samsung as it clears room in its crowded product portfolio for yet another Galaxy Tab. One month after announcing it at Mobile World Congress, the outfit's bringing its 7-inch sequel to the masses. As if Sammy's Galaxy Tab lineup weren't already overflowing, this guy comes bearing internals that make it near-identical to the OG Galaxy Tab and 7.0 Plus that have come before it.

A few specs, though, have seen downgrades: the front-facing camera now has VGA resolution, and the dual-core TI OMAP processor powering it is clocked at a lower 1GHz. Still, the 1024 x 600 TFT LCD display remains intact, as does the 3-megapixel rear camera, microSD slot and IR blaster. It's a puzzling hardware refresh ushering in modest tweaks to a proven design, with the biggest change of all being the move to Ice Cream Sandwich (with TouchWiz, of course). Is that software upgrade alone compelling enough to warrant an entirely new piece of hardware in Samsung's lineup? Maybe, maybe not. It all comes down to price, and at $250 this WiFi-only tablet could give consumers with Kindle Fire ire something to talk about. Follow past the break to see what we mean. Samsung's Galaxy Tab 2 (7.0) is a smart choice for budget-conscious buyers looking for a dependable Android 4.0 tablet on the cheap.

How would you rate the Galaxy Tab 2 7.0?
We want to hear what you think. Post a quick review now to join the conversation!
Write a review

Some family resemblances can be tenuous, causing those in the know to cast suspicious glances towards the figurative OEM milkman, but in the Tab 2's case, the parental lineage is all too clear. With a build that's barely indistinguishable from the higher-end 7.0 Plus (now about $420), the tablet tacks on a marginal amount of thickness, measuring in at 10.5mm versus 9.96mm. Still, despite that extra padding it weighs the same as its older sibling: 345 grams, or about 0.76 pounds.

At first blush, it would appear Samsung's done little, if anything, to set these two devices apart. After a closer, lingering inspection, though, you'll notice some tell-tale signs of a refresh, like the omission of both a frontward speaker grill and LED flash 'round back. Cosmetically, those are the standout differentiators, but there are more subtle tweaks that make this iteration feel like more of an ergonomic match made in hand. Flip the Tab 2 into landscape orientation and you'll see that its smooth, gunmetal grey enclosure spills over gently to meet the bezel with more of a pronounced curve. That alteration ultimately makes the tab more pleasant to hold while watching video, browsing one-handed or viewing photos. While it would've been nice to see the 7.0 Plus's classier faux-brushed metal digs make a reappearance, the move to a smooth enclosure shouldn't ruffle prospective owners; it's still smudge-free, despite being slightly slippery.

Schematic variation clearly wasn't on order when Samsung set its designers loose on the Tab 2. As it was on the Plus, so, too, it goes on the Tab 2 (7.0). The right side is home to hardware keys for power and volume, in addition to an IR blaster, while a proprietary charging dock and dual speakers take up residence at the base. Move to the left and you'll find a covered microSD slot, with the 3.5mm headphone jack sitting on the nearby top edge. The tab's backside reveals no superfluous embellishments, save for the unaccompanied 3-megapixel shooter and Samsung's logo. The front face is as unadorned as ever, with a VGA camera and ambient sensor shrouded in the thick black bezel that surrounds the 7-inch, 1024 x 600 PLS TFT display. It's a pity, really, that Samsung isn't doing more to move beyond that old screen tech, employed as far back as the original Galaxy Tab. While viewing angles appear to hold up well, it still succumbs to extreme-enough lighting. Truly, the Tab 2 (7.0) could almost double as a mirror given its propensity for reflection.

Right out of the gate, the Tab 2 (7.0) is hamstrung with lesser specs than its big brother, the 7.0 Plus. Its CPU, fashioned by the folks at Texas Instruments, differs from the Samsung-made Exynos chip used in the Plus. Not to mention, it's also 200MHz slower. Does that translate into a noticeable difference? Well, yes and no. Using a gamut of performance tests as our guide, Sammy's refreshed tab takes a solid backseat to its older sibling, losing in every round, save for a infinitesimal Neocore win. In the real world, though, those second best benchmark tests won't carry much weight, thanks to the tab's pleasingly fast user experience. Navigation through the carousel of homescreens bumps along at a consistent, fluid pace. Not once did we struggle with the kind of hiccups that plague other skinned Android slates.

The browser on the Tab 2 (7.0) may not be as fast as the Plus's, but its ability to snappily render full desktop pages in as little as 10 seconds should not leave users wanting. Even pinch-to-zoom feels brisk, although you will notice some white spaces, along with a loss in the integrity of the text. When it comes to longevity, the company's once again fallen back on the tried-and-true: a 4,000mAh juicepack. Except where you'd imagine this less demanding, lower-clocked tablet would more slowly sip that allotted power, it actually chugs, going from full to empty after seven hours and 38 minutes of video playback, compared with eight hours and change for the 7.0 Plus. That's with Twitter set to sync at 15-minute intervals, one push email account active, brightness set to medium, and WiFi, Bluetooth and GPS enabled. Should you require less intense usage, you could probably squeeze a day and half of productivity from a single charge.

For better and worse, Samsung's TouchWiz overcoat looks nothing like Google's vision of Android 4.0.

Compared to Samsung's Note products with their suite of S Pen apps, the very vanilla Tab series offers much less in the way of standout features. Still, in a bid to position the Tab 2 (7.0) as a media consumption device, Samsung outfitted it with an IR blaster. Coupled with the pre-installed Peel app (the same one loaded on the 7.0 Plus), the Tab 2 becomes a universal TV remote replete with personalized program recommendations. It's a welcome value-add that turns what would otherwise be your second browsing screen into a living room accessory. But that's not the main star of this 7-inch, galactic show: those honors go to its Android Ice Cream Sandwich UI. For better and worse, Samsung's TouchWiz overcoat looks nothing like Google's vision of Android 4.0. It all depends on which you prefer more: the pure vision set forth by Andy Rubin or the user-friendly enhancements brought forth by Samsung. Certainly, a UX of any kind is an acquired taste, and here it manages to stay relatively unobtrusive. You'll have access to the same suite of GApps, in addition to a heaping helping of bloat -- about twenty, in total -- some of which can be disabled, not uninstalled. What are the culprits this time 'round? Well, for starters, you have Samsung's own ChatOn, Media Hub, Memo and S Planner applications joining the likes of Netflix, Polaris Office and Amazon Kindle, just to name a few. Hopefully, if you opt-in for this tablet, you can live with that permanent application load.

In what's turning out to be a very pro-consumer trend, Samsung's bundling the Tab 2 (7.0) with a complimentary, one-year Dropbox account with 50GB of storage, similar to what HTC's offering with its One devices. That extended cloud storage is intended to complement the built-in 8GB it ships with, and whatever size microSD card you choose to insert (you can go as high as 32GB).

It goes without saying that tablets aren't the most reliable, nor for that matter satisfactory replacements for smartphone cameras, much less point-and-shoots. That said, the rear 3-megapixel shooter does a decent job of producing fairly detailed (if slightly oversaturated and noisy) shots. There's no elegant way to zoom in and out using the on-screen interface, so users will have to awkwardly toggle with the volume rocker for that purpose. There's also no tap-to-focus here. What you will have access to is a host of customizable in-app settings familiar to most users, like scene modes, resolution and white balance. Video playback, recorded at 720p resolution, evinced many of the same quirks, like that slight overcompensation for color and fuzzy overall composition. Audio, however, is undeniably poor and, as you'll hear in the sample recording, comes across extremely muffled and static-y, picking up only the loudest of environmental sounds.

You'll be hard-pressed to find a better ICS tablet at this price.

So why should Samsung risk further diluting its dominant Android tablet brand with a WiFi-only hardware refresh that takes away much of the performance and construction gloss of the more premium, 21Mbps HSPA+ enabled Plus? Well, positioned at half the price -- $250 -- the 7-inch Tab 2 is already the more compelling option for budget-minded shoppers. Subtract the need for a monthly data contract, factor in some (mostly) comparable internals and you've got a low-cost device that escapes allusions to other budget devices. As a Galaxy Tab alternative, the Tab 2 is a sound purchase. But there's another unpretentious 7-incher that's been sweeping the market with its open arms, Android architecture and deeply integrated ecosystem : the Kindle Fire. That tablet, still running an unrecognizable build of Gingerbread, offers an identical wireless experience and costs $50 less, to boot. Backed by Amazon's vast e-book, MP3 and on-demand video library, the Fire comes off as the indisputable king of this hill. There's just no overwhelming reason why consumers would dole out extra money for a media consumption device that does the same duties without the vast content resources. Fanboyism aside, you'll either want to pony up for a network-connected slate or get the best bang for your buck -- and that would be the Kindle Fire.

At almost half the price of the similar-looking Galaxy Tab 7.0 Plus, the Tab 2 performs gracefully, comes with ample storage space to harbor your vast trove of media, and generally makes Google's latest software more accessible. Still, despite its reliable performance, it seems to us that Samsung didn't do enough to effectively overpower the allure of the Kindle Fire's tidy ecosystem. Without access to a well-curated content library, the Tab 2 (7.0) doesn't really stand out amid an ever deepening line of Android 4.0 devices, and it will have to work that much harder to win the hearts of consumers looking for a 7-inch tablet (or just a really inexpensive one). All that said, you'll be hard-pressed to find a better ICS tablet at this price. So if that newly minted OS is what your wallet's angling for, go ahead: take the plunge and call this media-minded slate your own. Had Samsung chopped off an extra $50 and put this on even ground with the Kindle Fire, though, it might have had an even clearer winner on its hands.