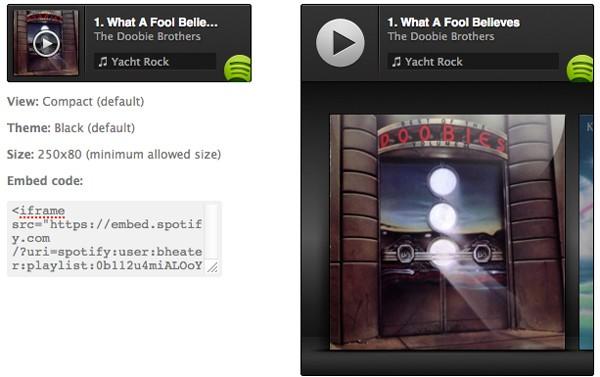 The music streaming wars have been heating up a good deal, as of late, thanks in no small part Spotify's long-awaited US launch. Since then, Rhapsody bought its one-time chief competitor Napster, both Pandora and Rdio underwent major redesigns and Mog finally launched a Windows client. Naturally, all of this has proven good news for the consumer, as services have a features arms race of sorts, gunning for the top spot. None of the contenders are quite perfect, of course -- when Spotify launched, for example, we couldn't help but note the absence of a browser-based option of the sort employed by Rdio and Pandora. Today's announcement still leaves open that possibility, but it does mark a new web-focused strategy for the company -- on that could arguably have a much larger impact on Spotify's fortunes than a simple browser-based UI.

Today marks the launch of the Spotify Play Button -- a name we assume the Swedish company settled on before Google announced the whole Android Market rebranding thing. The button is, essentially, a widget that allows site owners to embed songs and playlists directly from Spotify's massive catalog of songs. It's a simple idea, sure, but well executed, it could prove a major win in the service's attempt to stand out in the ever-more competitive world of music streaming. After all, embedding music on sites has long been a fairly haphazard deal -- unless you happen to have a deal with a proprietary player, it means snapping up something like a YouTube video, which often live in, at best, a legal gray area.

Of course, the company wouldn't launch a new feature like this without announcing some high profile partners, and Spotify's got a pretty solid lineup here, including Tumblr, The Huffington Post, Time Out Group , The Guardian, NME, Rolling Stone, Entertainment Weekly, People and Spin, among others. Spotify is really playing up the Tumblr integration in particular, which lets users create embeds that match their blog theme with a few clicks.

The real news here, though, is just how easy the feature is for all of the amateurs out there. Spotify gave us early access to an early build of the Widget Creator tool, and really, the whole thing was accomplished with a few clicks. You grab the link of a song, album or playlist from the Spotify app with a right click, paste it in the field and click Generate. The app offers up two options -- a small embed, as seen above the break, and the larger one seen below. We opted for a single track for the small embed and a playlist for the larger, though you don't have to adhere to that. You can grab the embed code from a field or the widget itself once created -- click on the upper right corner on either one right now, and you'll see fields for an embed and URL.

The player's default design is straightforward and should fit into most blog settings fairly well -- the small version is a quarter devoted to the cover art, with the artist and track name above the status bar. You can also adjust the dimensions and make a few tweaks to the color scheme. Clicking the art will play the track. If it's a playlist, you'll get options for advancing the track next to the status bar. The only aesthetically jarring bit (assuming, of course, that this isn't Cannibal Corpse artwork that we're dealing with here) is the bright green Spotify logo in the bottom right hand corner -- but, hey, it's gotta remind us all who's running the show, right? The larger player, meanwhile, devotes the bottom portion to the artwork of the current track. If you're dealing with a playlist here, you can toggle this to view a listing of all the included tracks.

As promised, there are no pop up or banner ads here. Also cool is the fact that, should you happen to be signed into Spotify at the time, the song will also register is playing on the app, which means, for example, that if you're listening to a tune on Spotify and click another via the play button on a blog, the two won't play over one another, sound collage-style. Non-paying users, however, will still be served up with the normal barrage of ads -- Spotify does have to turn a buck, after all.

So, why doesn't this exact product already exist in the world? We suspect that the problem lies -- as it often does -- with the record labels. How did Spotify circumvent the thorny maze of negotiation on this? Well, the company already struck deals with the labels. We spoke to a Spotify employee who assured us that the company didn't actually strike any new deals here -- meaning, apparently, that the site believes the new method of distribution to be covered by its existing deals. It remains to be seen whether labels are ultimately as pleased by this as Spotify seems to think they'll be.

From a consumer perspective, however, if you weren't a Spotify user before, you likely will be one soon -- whether or not you actually go so far as signing up with the service. If you regularly visit one of the aforementioned partners or even personal music blogs, odds are good that Spotify will be playing your jam soon.

Calling all bloggers and web editors! Today we're making Spotify available across the internet with the introduction of the Spotify Play Button - giving you the power to play any song, album or playlist in Spotify through your website instantly, legally and for free.

The new Spotify Play Button makes it easier than ever to deliver all the world's music to your online fans. No more distracting banners and pop ups, no more legal takedowns, just millions of songs available in top quality audio.

"Today we're giving every blogger and web editor the ability to light up the internet with music," says Gustav Söderström, Chief Product Officer at Spotify. "Adding a personalised soundtrack to your website or blog has never been this easy."

He adds: "You want to give your fans access to any song, album or playlist of your choosing and in its entirety, while ensuring people stay glued to your site. The Spotify Play Button does all of this for free, while making sure artists get paid for every play."

We've teamed up with some of the best and brightest to offer the Spotify Play Button to their fans from today. Partners include Tumblr, The Huffington Post, ELLE , Entertainment Weekly, PEOPLE , Time Out Group (New York City, Paris, London), Rolling Stone, Mashable, FanBridge, ShareMyPlaylists.com, FanRx, Popdust, The Independent, the Guardian, NME, Wonderwall, The Fader, Pitchfork, Noisey.com, Chegg, and SPIN.com.

The Spotify Play Button is now fully integrated into the Tumblr dashboard. So if you blog with Tumblr, just type in the song or album you want, and Tumblr makes the widget for you to fit in your blogs theme.

David Karp, Tumblr founder and CEO, comments, "We deeply value music as a form of creative expression. That Spotify now lets our users share from millions of their favorite songs is revolutionary, and as huge fans of the product, we are absolutely overjoyed about this partnership."

The Huffington Post has also teamed up with us for the first time, combining Spotify's music know-how with the US news website's editorial expertise.

"We're always looking for surprising new ways to engage our users, and what better way than with music?" says Arianna Huffington, President and Editor-in-Chief of The Huffington Post Media Group.

She adds: "We're delighted to partner with Spotify to introduce great music across The Huffington Post. Now, in addition to starting and joining conversations, our users can experience custom soundtracks - whether it's upbeat workout playlists for our Healthy Living section or the latest crowd-moving party songs for the brides and grooms checking out HuffPost Weddings."

Getting the Spotify Play Button for your website couldn't be simpler: just grab any song, album or playlist URI from within Spotify and head to our developer website to get the embed link. That's it!

Anyone new to Spotify will be set up with the Spotify desktop app, which powers the button in the background, as soon as they start playing the music - your fans will never have to leave your site.

In this article: embed, entertainment weekly, EntertainmentWeekly, hands-on, huffington post, HuffingtonPost, music streaming, MusicStreaming, play, play button, PlayButton, player, spin, spotify, streaming, tumblr
All products recommended by Engadget are selected by our editorial team, independent of our parent company. Some of our stories include affiliate links. If you buy something through one of these links, we may earn an affiliate commission.
Share
Tweet
Share