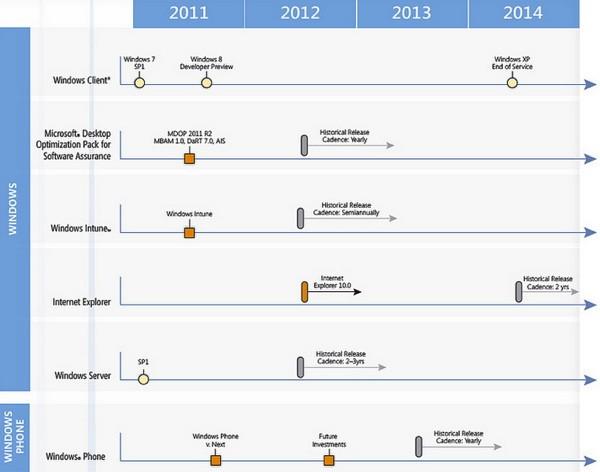 If it's accurate, then this leaked Microsoft roadmap has revealed the company's plans for many of its forthcoming products. Here's the basics: Internet Explorer 10 is due part-way through the year, at the same time that we hope to see Windows 8 appearing. Office 15 will enter beta-testing partway through 2012 and become "available" next year, but that's no sure sign of a release date. On the Windows Phone front, there's a launch expected in the summer that's labelled as "future investments," which we can only hope is a euphemism for Apollo. Oh, and any Silverlight fans better pour one out for their beloved flash-killer: nothing was marked on its timeline after the December 2011 release of Version 5. After the break we've got another shot of the internal document that Windows fans will spend the next few days analyzing with Zapruder-esque fervor.

In this article: Apollo, Leaked, Microsoft, Microsoft Office 15, Microsoft Roadmap, MicrosoftOffice15, MicrosoftRoadmap, Office 15, Office15, Roadmap, Silverlight, Windows 8, Windows Phone 8, Windows8, WindowsPhone8
All products recommended by Engadget are selected by our editorial team, independent of our parent company. Some of our stories include affiliate links. If you buy something through one of these links, we may earn an affiliate commission.
Share
Tweet
Share