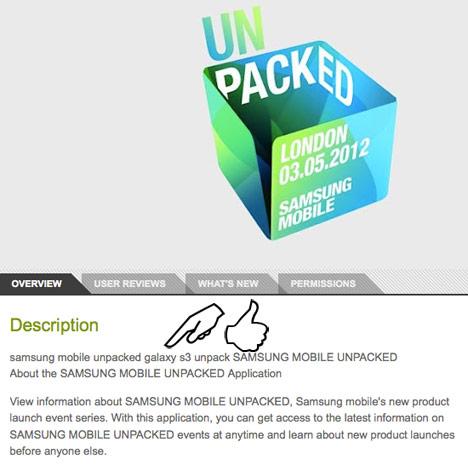 Up until now, we haven't actually had any confirmation of what Samsung's upcoming superphone would be named. We've had plenty of reason to believe that it'd simply be the third iteration of the famed Galaxy S line, and even an Amazon Germany page predicting as much, but it's another thing entirely to see the term "Galaxy S3" used by Samsung itself. Indeed, that's exactly what's happening with the release of its Mobile Unpacked 2012 app, which will allow prospective users to stream the event as it happens in London on May 3rd, while also gathering facts and figures once the event passes. Whether or not the whole GSIII thing sticks remains to be seen, but if you're curious, we'll also be on hand to liveblog every revealing second of it.