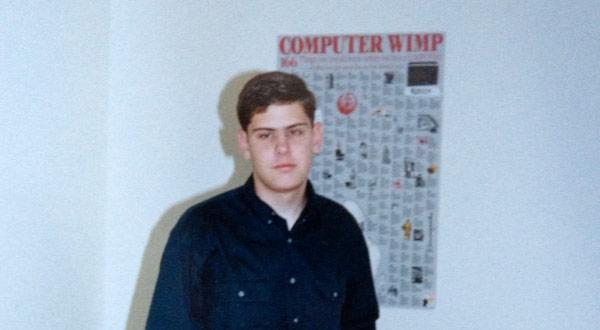 Welcome to Growing Up Geek, an ongoing feature where we take a look back at our youth and tell stories of growing up to be the nerds that we are. Today, we have our new editor, Jon Fingas.

You might say I started early. Some of my first memories of technology -- or of anything, really -- were of mashing the keyboards on Compaq PC clones at my dad's workplace when I was three. Little did I know that I'd started on a path towards technology that would lead me towards mashing the keyboards for a career that would land me here at Engadget.

I should have seen it coming after that: as I grew up, I wanted to be an astronaut or a fighter pilot like seemingly every other boy, but my attention ended up focused on what made those spaceships and airplanes tick. To this day, I still have a stack of books about Russian fighter jets and the future of space... and a 1990s-era Star Trek spaceship guide autographed by Marina Sirtis (Deanna Troi).

Having a computer at home didn't follow until I was seven, when the family finally got a monstrous 80286 PC. I was immediately hooked on Sierra's classic adventure game The Black Cauldron, and I credit that early experience to making me a regular gamer to this day. And, of course, making me a permanent geek. I was always the first kid on the block to try Doom, or Descent, or seemingly anything that involved computers and gaming.

The family home was never without at least one computer, and at one point we had four; it was to the point where virtually everyone had a computer they could use. I was surprisingly late to some technology trends, though. I didn't own a (permanent) video game system until I bought a PlayStation 2 in 2000, by which point I was well into university, and I didn't have an MP3 player until a 20GB, fourth-generation iPod showed on my doorstep just before grad studies in 2004. My first cellphone? An iPhone 3G in 2008. I've been making up for lost time.

My path to writing about technology probably started with my first Mac, a titanium PowerBook G4 in 2002. It was at that point that I realized numbers weren't the only things that mattered in technology; it's about how well it fits into your life, and I wanted to share that knowledge with others. I've been a Mac user ever since, but I've always made it a point to be the technology equivalent of Switzerland: I dual-boot Windows, and I carry both an iPhone and a Galaxy Nexus. There's no such thing as giving a company a free pass here.

I've been a big fan of street photography for much of the past decade. I've shot with everything from a lowly Canon PowerShot S400 (four whole megapixels!) to a Sony NEX-5N. But I'm definitely in Chase Jarvis' camp on using whatever you've got with you: some of the best photos I've taken in recent years, the ones I've remembered the most, were with a cellphone.

I can get sentimental, and still have that PowerBook waiting for the day when I can miraculously get it back in working order, but I've always been looking forward to the future. What's faster and smaller? What's making my day to day life better? If you know the answer to those, you know where to find me.

Jon Fingas is on Twitter as @jonfingas, where you can find both shameless plugs as well as frequent talk about Canadiana like reasonable government and poutine.

In this article: android, Apple, canon, Galaxy Nexus, GalaxyNexus, growing up geek, GrowingUpGeek, iphone, iPhone 4s, Iphone4s, ipod, Jon Fingas, JonFingas, NEX-5N, photography, PlayStation, playstation 2, Playstation2, powerbook, powerbook g4, PowerbookG4, powershot, PS2, samsung, Sierra, Sierra-Online, SONY
All products recommended by Engadget are selected by our editorial team, independent of our parent company. Some of our stories include affiliate links. If you buy something through one of these links, we may earn an affiliate commission.
Share
Tweet
Share