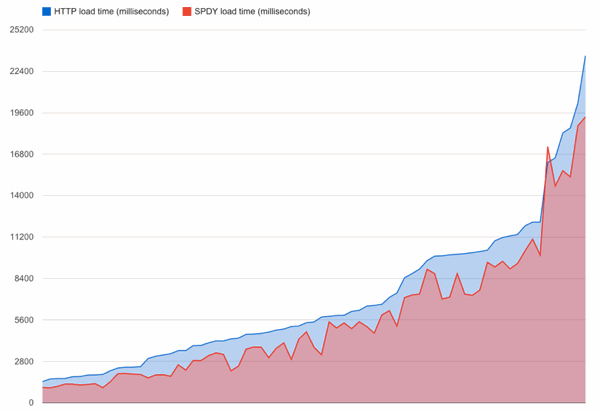 If there's anything that Google doesn't like, it's things that collect dust. The company is famous for its annual spring cleaning efforts, in which the firm rids itself of redundant and dead-end projects, along with more bullish moves, such as its push to overhaul the internet's DNS system. Now it's looking to replace HTTP with a new protocol known as SPDY, and to that end, it's demonstrating the potential speed gains that one might expect on a mobile network. According to the company's benchmarks, mean page load times on the Galaxy Nexus are 23 percent faster with the new system, and it hypothesizes that further optimizations can be made for 3G and 4G networks. To its credit, Google has already implemented SPDY in Chrome, and the same is true for Firefox and Amazon Silk. Even Microsoft appears to be on-board. As a means to transition, the company proposes an Apache 2.2 module known as mod_spdy, which allows web servers to take advantage of features such as stream multiplexing and header compression. As for HTTP, it's no doubt been a reliable companion, but it seems that it'll need to work a bit harder to earn its keep. Stay weird, Google, the internet wouldn't be the same without you.

In this article: amazon, apache, chrome, firefox, google, google chrome, GoogleChrome, http, internet, internet explorer, InternetExplorer, microsoft, mobile network, mobile networks, MobileNetwork, MobileNetworks, mobilepostmini, mozilla, mozilla firefox, MozillaFirefox, protocol, silk, silk browser, SilkBrowser, spdy
All products recommended by Engadget are selected by our editorial team, independent of our parent company. Some of our stories include affiliate links. If you buy something through one of these links, we may earn an affiliate commission.
Share
Tweet
Share