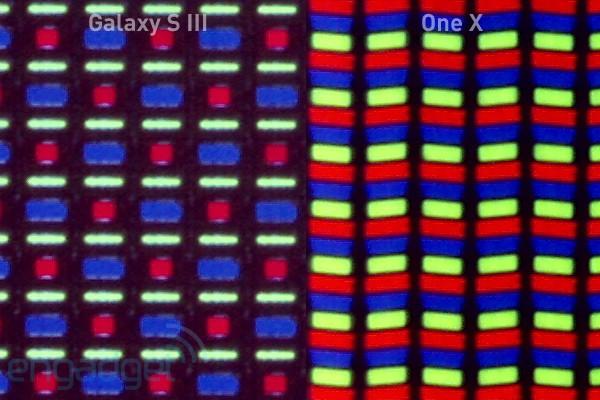 By now you should already know that the brand-spanking-new Samsung Galaxy S III sports a 4.8-inch HD Super AMOLED display. That's right: no "plus" here, which means this 720p panel is featuring the same old PenTile RBGB pixel arrangement -- just like the 4.65-inch version on the Galaxy Nexus and the Galaxy S II HD LTE. Needless to say, this is again pure ammunition for the folks over at LG; but as we've mentioned before, HD Super AMOLED's superb contrast and higher-than-before pixel density outweigh its shortcomings in most cases.

For now though, let's examine these sub-pixels with a 230x zoom USB microscope and compare them with other phones that we have in hand. Starting off with the HTC One X's 720p SLCD 2 above, you can see how its denser sub-pixels produce a finer picture, but ultimately it's still behind HD Super AMOLED when it comes to contrast, especially with black. Read on for more comparisons. Next up we take a look at the Galaxy Nexus. While the two share very similar contours and side profiles, the older phone has a 4.65-inch HD Super AMOLED display, while its new cousin has a 4.8-inch panel sporting the same technology. Naturally, the pixel density is slightly lower for the latter (as you can see above), but we barely noticed any difference with our own eyes during our quick hands-on. Judging by the microscopic pictures above though, it does look like Samsung's made the red sub-pixels slightly smaller, so we shall perform some more comparison tests when we review the Galaxy S III.