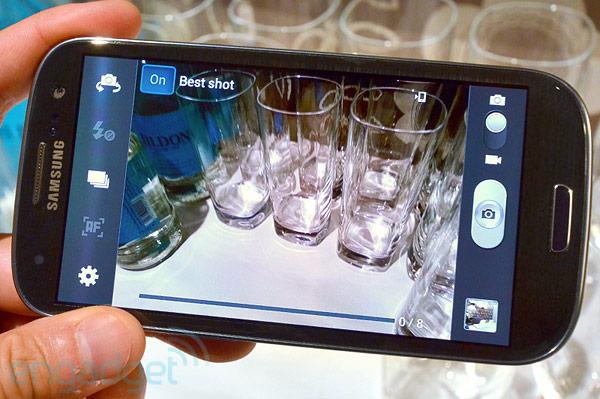 Samsung's Galaxy S III doesn't boast 41-megapixel captures or top-of-the-line optics. Instead, its camera's strengths are in its intelligent organization and social features, increasing the handset's appeal as a point-and-shoot alternative for casual photographers. Samsung's latest round of compacts and mirrorless dedicated snappers reaffirm suspicions that the company is taking a different approach to photography, focusing on connectivity and social enhancements, rather than updated sensor and low-light shooting technologies. While such decisions may prompt advanced shooters to bring their business to competitors, it highlights Samsung's strengths on a broader level, as a connectivity enabler, rather than a camera maker.

The company is clearly committed to growing its ecosystem and uniting product divisions in an effort to increase penetration throughout different categories, developing sharing tools that simplify workflows and increase appeal. Samsung's latest flagship smartphone packs standard specs, like 8-megapixel stills and 1080p video, but it offers a handful of software features that combine to make the device a compelling upgrade, especially from an imaging perspective. Join us past the break as we detail the Galaxy S III's photography enhancements, from Best Photo to Face Zoom.

We don't blame you for not being impressed with the Galaxy's camera itself, but that's not the point -- software enhancements improve the shooting experience without boosting specifications. Both cameras can shoot HD video (the 8-megapixel rear-facing module captures 1080p, while the 1.9-megapixel cam up front records at 720p), and a new feature enables still snaps as you capture clips, with an on-screen shutter button popping up in the top right corner. The S III also offers a burst shooting mode at 6 frames-per-second for up to 20 continuous shots and a new Best Photo mode, which snaps eight consecutive images (also at 6 fps) of the same scene, highlighting the most appealing frame, based on parameters that include sharpness, contrast and the subject's expression. Best Photo allows you to save the pre-selected image, or any of the other frames before discarding.

Samsung's Siri-like voice recognition tool lets you launch the photo app and even snap a frame without tapping the screen. Assuming your phone is connected to the web, a command like "I want to take a picture!" brings you to the app, while saying "Cheese!" (as you smile, of course) prompts the phone to capture an image. There's no dedicated shutter release button, but there is S Voice.

We've touched on S Beam a bit in our preview post, but the feature is most useful for sending photos and video, so it certainly has a place here. Using NFC, one Galaxy S III forms a connection with another when they touch, enabling instant transfers using WiFi Direct. You can send stills or movies directly to another handset with a few taps, at speeds of up to 300 Mbps.

This feature rewards those of you who keep your contacts list organized by group. If certain photos include an individual with a contact profile, that pic will automatically be assigned to a matching group in albums. For example, if John is listed under Family in contacts, he'll also appear in an album called Family, making it easy to locate images without taking the time to assign them to specific albums.

We saw a hint of this with the Google Glasses demo, but Social Tag is about to hit the mainstream. The feature matches subjects in photos to the profile image on their contact page, then displays contact info as an on-screen overlay during photo playback. Google+ content will pop up in full, in addition to a Facebook profile link (no embedded info) and a shortcut to your subject's contact page.

Expanding on those facial recognition and contact list enhancements is a feature called Buddy Photo Share, letting you boot a pic to your friend with a single tap. Like Social Tag, Buddy Photo Share uses the profile image from your bud's contact page for identification, and also sends on the shot to the email address saved on your Galaxy S III.

This facial recognition feature highlights individuals standing (or seated) together in a group, letting you simply double tap on a face to fill the frame. It doesn't appear to be much different from the traditional double-tap zoom option, but we suppose this method enables a bit more precision.

We don't see many practical uses for Face Slideshow, which creates a separate slideshow that zooms in on each individual face in a group photo. Still, you might find it entertaining, especially when it comes to making out individuals in a huge group shot. The feature essentially creates a slideshow from one image, cycling through portraits of each person in the frame. That's about it.