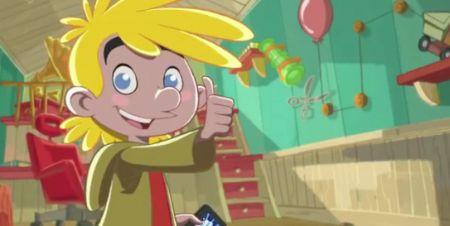 148Apps has done a little bit of digging, and has possibly discovered what Angry Birds creators Rovio are up to next. Rovio recently released a thank you/teaser video for a full billion Angry Birds downloads, and in the very end of that video, a character appears: It's a younger kid, with some pulleys and balloons in the background.

Haven't we seen that kid before? Indeed, it appears to be Casey, of Casey's Contraptions, an iOS game that came out around this time last year. That game is still available, in HD form anyway, on the App Store. Casey's creator Noel Llopis said this to 148Apps: "Before rumors start flying, Rovio is a perfect gentleman. Not a Zynga at all. Don't worry, all is well." That seems to point to the fact that Rovio has possibly acquired Llopis' skills and the game, and is presumably publishing it or a sequel in the near future.

I'm not sure this is the game Rovio was talking about when they said they were making a non-Angry Birds title -- Rovio has acquired other developers before, so this seems more like an acquisition or a publishing deal than an official Rovio game. But we'll see -- Casey's Contraptions was a terrific game that suffered a little bit from lack of exposure, and Rovio has no shortage of an audience to bring to it. If indeed the two are teaming up on another Contraptions release, odds are that's good news for everybody.

In this article: 148apps, caseys contraptions, caseys-contraptions, CaseysContraptions, gadgets, iOS, iPhone, noel-llopis, rovio, rube goldberg, RubeGoldberg
All products recommended by Engadget are selected by our editorial team, independent of our parent company. Some of our stories include affiliate links. If you buy something through one of these links, we may earn an affiliate commission.