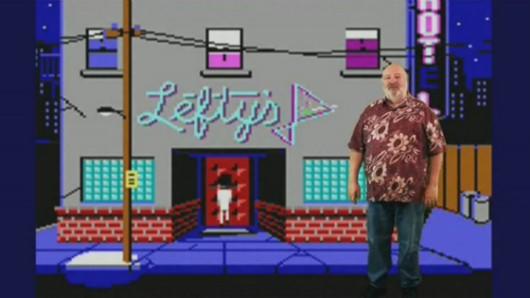 After seeing success, both Leisure Suit Larry and his creator Al Lowe fell upon dark times. Lowe and his polyester-clad protagonist have lived through the rise and fall of Sierra On-Line, multiple intellectual property changes, and two very poor attempts at bringing Larry to a new generation of gamers.

"It was like seeing a video from your son's kidnappers!" Lowe told Joystiq. "On one hand he's still alive but it's like, 'Oh God, what are they doing to him!' And it just pained me to watch it happen. You know I put ten years of my life into that guy and he was very good to me."

Leisure Suit Larry starred in seven titles under the Sierra banner, turning it into a billion dollar business for founders Ken and Roberta Williams. But success would be bittersweet for both Lowe and the Williams family, as Sierra On-Line found itself ensnared in the middle of a hostile takeover that would evolve into one of most infamous scams in video game business history.

"One Monday morning Walter Forbes [a Sierra board member] said, 'I'm gonna buy Sierra, and I'm gonna buy Blizzard, and I'm gonna pay a billion dollars each for them! I'm gonna take over and if you try to fight me then your shareholders will come after you with lawyers galore!'" Lowe said.

A shrewd and crude businessman, Forbes participated in a series of shady mergers and acquisitions during the late 1990s, which eventually caught the attention of the Department of Justice.

"He had a company called CUC [Comp-U-Card International], which later merged with HFS [Hospitality Franchise Systems], a company owned by Harry F. Silverman. Shortly after they merged, Harry announced accounting irregularities with CUC, now known as the Cendant Corp. After a lengthy investigation, the SEC [Securities and Exchange Commission] issued Cendant the largest fine in history at the time," Lowe said. "So the Justice department went after Forbes and his cronies and now they're all serving time in federal prison."

In 2007, Forbes was sentenced to 12 years in prison and ordered to pay $3.275 billion in restitution for his crimes in the 1990s. He was prosecuted by the New Jersey state attorney's office, led by Chris Christie, now the state's Governor. "The public has waited many years for Walter Forbes to be brought to justice," Christie said at the time.

[They] started a business on their kitchen table that grew to be a billion dollar company under their leadership and four years after they were forced out, the company turned off the lights and locked the doors.- Al Lowe on the fate of Sierra On-Line

Prosecutors said Forbes schemed to inflate the stock of CUC by $500 million dollars, and when Silverman reported irregularities it caused the market value to drop by $14 billion in a single day. Acquisitions of companies like Sierra and Blizzard were simply part of a grand scheme to cover up the fraud.

"It was one of those famous meetings where new management comes in and says, 'We love this company and we don't want to change anything!' Which translated into English means 'We're gonna screw up everything!' And that's pretty much what happened," Lowe said.

Sierra, Blizzard and other game companies involved were eventually dumped to Havas, a French conglomerate who then merged with Vivendi. Vivendi and its properties continued to trade hands for years until the Activision Blizzard partnership. "I have friends who remained with the company who had six different business cards in two years," Lowe joked.

Soon after the fiasco, Lowe decided to make a bittersweet exit from the video game industry.

"I mean look at it from their perspective. [The Williams family] started a business on their kitchen table that grew to be a billion dollar company under their leadership and four years after they were forced out, the company turned off the lights and locked the doors," Lowe said. "To watch something you've built for 25 years go from nothing to something then watch it go down the drain in such a short period of time ... that's gotta be painful."

"Towards the end they came to me and said, 'This game needs help.' I said, 'Well, maybe, what are we talking about?' Well first you've got to sign a non-disclosure agreement, then you have to sign a contract that says you will only say good things about the game, and for that we'll give you some money."

And I said, "Wait a minute, I haven't even seen the game yet and you want me to say that I'll never say anything bad about it? How bad is it?'" Without missing a beat, they admitted to Lowe that the game was, in fact, "pretty bad."

Lowe refused to participate. After purchasing and playing the game himself, he realized he'd made the right decision, even going so far as to write about the game on his own website. "Those who seek 3D boobs, profanity, and fart jokes will be pleased. Those who fondly remember my games will be severely disappointed," the creator wrote.

Lowe was determined to make things right for Leisure Suit Larry, but his goal would prove to be a difficult one to achieve. After announcing a high-def remake of the original Larry adventure was in the works, Lowe and publisher Replay Games found it difficult to secure funding. According to Lowe, while companies told him his titles were loved, they couldn't help bring the remake to market.

"While I'm sure we could have succeeded had we kept it up, a lot of doors were being closed in our faces because they didn't want to be associated with a company that was publishing Leisure Suit Larry," Replay Games CEO Paul Trowe told Joystiq.


After months without success, and seeing Double Fine dominate crowd-funding, the team decided to turn to Kickstarter, on what would mark the 25th anniversary of Leisure Suit Larry. The Kickstarter project started slow, with many questioning its $500,000 funding goal, but eventually surpassed its objective.

Since Leisure Suit Larry in the Land of the Lounge Lizards Reloaded, as it is now officially named, finished above its initial Kickstarter goal, Replay and Lowe have decided to include new content. The remake is now slated to launch sometime in 2013, falling short of its original October 2012 schedule.

"Those AAA publishers have gotten so greedy over the past 15 years that it's time they wake up and smell the 'Indie Spring' that is rising up from the ashes of closed development studios everywhere," Trowe said. "We are the 99 percent."

Larry now finds himself in a strange position, with funds coming from a mixture of veterans to his antics and those whose only interaction with the franchise came from two titles Lowe admits were abysmal. "To a certain extent those two games have poisoned the well," Lowe said. "There's a lot of people who know those games and don't know the old games who are gonna go, 'Yeah those games sucked! I'm not gonna support this new project!' ... and that's sad.

"On the other hand, I think we're going to be able to convince people that, 'Yeah, try this, you'll laugh your ass off. Yeah it's sexy, but it's funny too.'"

After a long, hard, and perverted road, there's a light at the end of the tunnel for Larry Laffer. According to Lowe, even Ken and Roberta Williams "couldn't be more pleased" with the reception of Larry's return.

"I think there's finally hope at the end of this long brutal violent horizon that we'll all laugh again soon."

Dave Oshry is a freelance writer based out of San Diego, California. His work has been featured on Kotaku, VG24/7, and PC Gamer. You can follow him on Twitter @DaveOshry.
In this article: Al-Lowe, android, ios, ipad, Kickstarter, leisure-suit-larry, mobile, pc, Sierra-Online, Vivendi-Universal, Walter-Forbes
All products recommended by Engadget are selected by our editorial team, independent of our parent company. Some of our stories include affiliate links. If you buy something through one of these links, we may earn an affiliate commission.