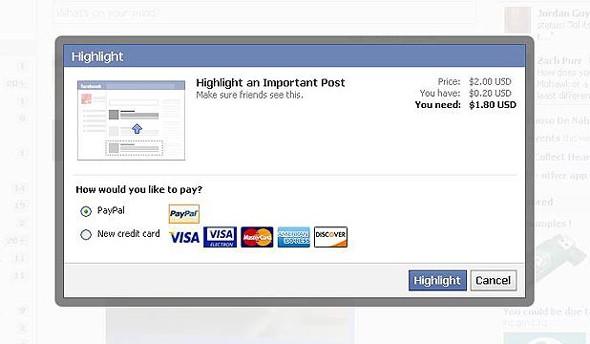 Finding ways to throw money at Mark Zuckerberg is notoriously difficult, but a new 'highlight' feature could be just the trick. Currently being tested with a small population of users, it allows an ordinary member to pay $2 to ensure that their latest status update crops up in more of their friends' news streams. Ordinarily, the degree to which a status update is streamed depends on the number of likes or comments it has, which ensures that users generally only see the juiciest gossip, but paying this little premium would cause Facebook's algorithms to distort that in your favor. In other words, it's money replacing popularity, or simply -- sigh -- life.

In this article: advertising, cash, cashing in, facebook, facebook highlight, facebook highlights, FacebookHighlight, FacebookHighlights, highlight, monetization, money, popularity, promotion, selling out, social networking, SocialNetworking, status, status update, StatusUpdate
All products recommended by Engadget are selected by our editorial team, independent of our parent company. Some of our stories include affiliate links. If you buy something through one of these links, we may earn an affiliate commission.
Share
Tweet
Share