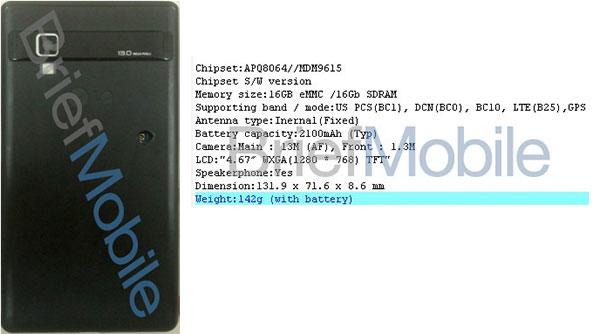 Not to be outdone by its Korean rival, LG's reportedly preparing a potent new phone with some of Qualcomm's latest SoC hardware. According to BriefMobile's leak, it'll pack an LTE-friendly MDM9615 alongside the Adreno 320 GPU and 2GB of RAM -- something LG has already announced for its Optimus LTE2. A 2,1000 mAh battery will apparently power the 4.67-inch 1280 x 768 LCD display, while a Sony-matching 13-megapixel camera will face out the back. The leak -- which includes the decidedly abstract photo above -- reckons the LTE slab will arrive on Sprint, which tallies with the LS970 model number. We're cautiously holding out for something more official soon -- perhaps once the Now Network's flipped that 4G switch.

In this article: 13-megapixel, 2gb ram, 2gbRam, 4.65-inch, 4G, adreno 320, Adreno320, eclipse, LG, LG LS970, LgLs970, LS970, LTE, MDM9615, mobilepostmini, smartphone, sprint
All products recommended by Engadget are selected by our editorial team, independent of our parent company. Some of our stories include affiliate links. If you buy something through one of these links, we may earn an affiliate commission.
Share
Tweet
Share