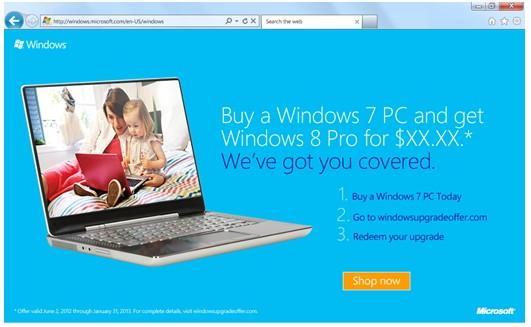 In need of a new computer, but holding out because you don't want to be saddled with a last-gen OS when Windows 8 lands? Worry not potential consumers, Microsoft plans to offer a cheap upgrade path to its latest and greatest if you buy in now. Well, not now, but soon. Starting June 2nd Redmond will offer a $15 upgrade from Windows 7 to Windows 8 Pro. Mary Jo Foley first reported the deal last week, but wasn't able to put a price on the offer. Now, Paul Thurrott is filling in those blanks. For $14.99 any new PC purchaser will be insured against the coming Metro revolution. This is hardly a new tactic for Microsoft, which has used similar deals to try and stave off steep drops in computer sales as the release of a new OS approaches. The only question we have left is, why the push to Pro? Though, far be it for us to look a gift horse in the mouth.