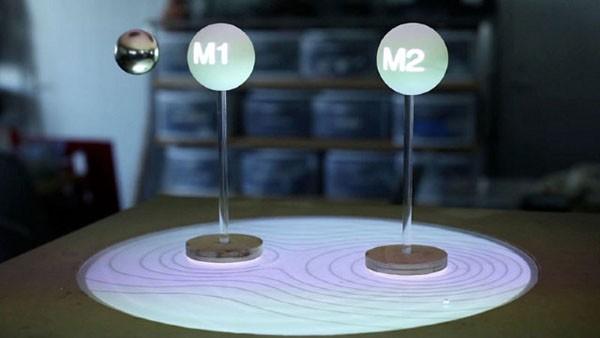 Playback of 3D motion capture with a computer is nothing new, but how about with a solid levitating object? MIT's Media Lab has developed ZeroN, a large magnet and 3D actuator, which can fly an "interaction element" (aka ball bearing) and control its position in space. You can also bump it to and fro yourself, with everything scanned and recorded, and then have real-life, gravity-defying playback showing planetary motion or virtual cameras, for example. It might be impractical right now as a Minority Report-type object-based input device, but check the video after the break to see its awesome potential for 3D visualization.

In this article: 3D, electromagnetic, electromagnetic field, ElectromagneticField, input device, input devices, InputDevice, InputDevices, levitation, magnet, magnetic levitation, MagneticLevitation, massachusetts institute of technology, MassachusettsInstituteOfTechnology, MIT, MIT Media Lab, MitMediaLab, Optical tracking, OpticalTracking, physics, Research, Science, tracking, ZeroN
All products recommended by Engadget are selected by our editorial team, independent of our parent company. Some of our stories include affiliate links. If you buy something through one of these links, we may earn an affiliate commission.
Share
Tweet
Share