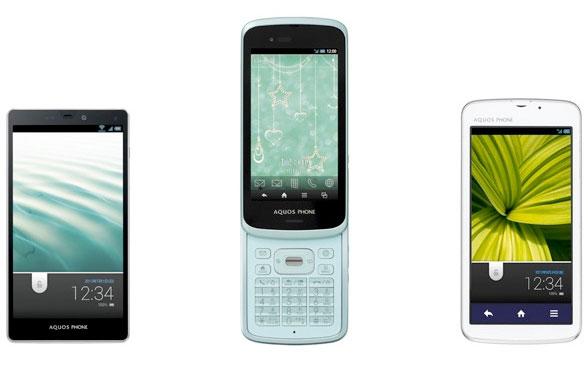 It's that time of the season again, as Japan's mobile carriers unveil more alternate-universe models that we'll probably never see elsewhere. Leading the pack is the final version of Fujitsu's long-time-coming quad-core Android phone, arriving as the Arrows Z ISW13F. With NVIDIA's Tegra 3, WiMAX connectivity, 16GB of built-in storage and a 4.6-inch 1280 x 720 display, Fujitsu's somehow jammed it all into less than 11mm of smartphone. The 13-megapixel camera includes an Exmor R sensor, while a microSD slot can add up to 32GB of space.

The AQUOS Serie is another belle of KDDI's spring ball, with a 4.6-inch 1280 x 720 display, 1-seg TV tuner and a 12-megapixel camera on the back. It's also the first phone to pack both NFC and Felica mobile payment hardware into the same device, mobile wallet fans. The collection is also joined by the HTC J and the final retail version of Kyocera and KDDI's "Smart Sonic Receiver" in the Urbano Progresso -- a phone that transmits sound through vibration. Any ex-pats in the mood for a new keitai can take a closer look at the rest of the new family at the source below.

Update: Kyocera has confirmed to us that the Smart Sonic Receiver used in the Urbano Progresso is indeed the same tissue conduction technology Kyocera demonstrated last week at CTIA Wireless.