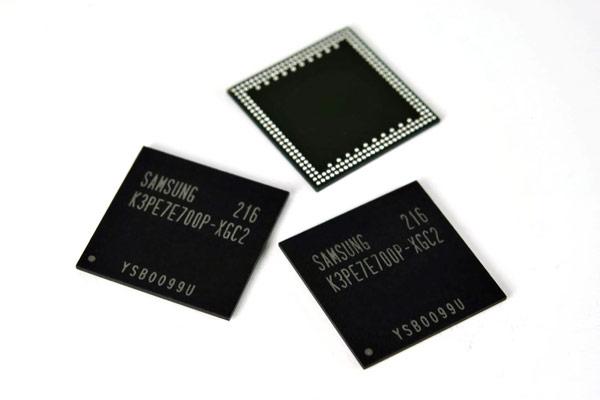 Samsung started making 2GB low-power mobile memory last year, but as the 1GB-equipped phone you likely have in your hand shows, the chips weren't built on a wide-enough scale to get much use. The Korean company is hoping to fix that now that it's mass-producing 20-nanometer, 4-gigabit LPDDR2 RAM. Going to a smaller process than the 30-nanometer chips of old will not just slim the memory down by a fifth, helping your smartphone stay skinny: it should help 2GB of RAM become the "mainstream product" by the end of 2013, if Samsung gets its way. New chips should run at 1,066Mbps without chewing up any more power than the earlier parts, too, so there's no penalty for using the denser parts. It's hard to say whether or not the 20nm design is what's leading to the 2GB of RAM in the Japanese Galaxy S III; we just know that the upgraded NTT DoCoMo phone is now just the start of a rapidly approaching trend for smartphones and tablets.

"Samsung began expanding the market for 4Gb DRAM last year with the first mass-produced 30nm-class DRAM, and now we are working on capturing most of the advanced memory market with our new 20nm-class 4Gb DRAM," said Wanhoon Hong, executive vice president, memory sales & marketing, Samsung Electronics. "In the second half of this year, we expect to strongly increase the portion of 20nm-class DRAM within our overall DRAM output to make the 4Gb DRAM line-up the mainstream product in DRAM production, and therefore keeping the leadership position in the premium market and strengthening the competitive edge."

As large-screen tablets and smartphones equipped with quad-core CPUs lead rapid growth of the mobile market, there is greater demand for more energy-efficient and higher-capacity memory products that guarantee longer battery life, as well as faster processing speed.

Furthermore, based on the 4Gb components, Samsung can deliver 2-Gigabyte (GB) solutions that boast razor-thin thickness of 0.8 millimeters (mm) , which stack four 4Gb LPDDR2 chips in a single LPDDR2 package. This new package is approximately 20 percent thinner than 2GB packages that stack four 30nm-class 4Gb LPDDR2 chips. Also, the new 2GB package can process data at up to 1,066 megabits per second (Mbps), while spending the same amount of power as that of a previous 30nm-class 2GB package. Benefits of the new 20nm-class 4Gb LPDDR2 will help speed up the growth of the 4Gb DRAM market.

Production of 20nm-class 4Gb LPDDR2 ensures Samsung the widest range of mobile DRAM products in the industry. This follows the company's previous achievement with 20nm-class DRAM, when it provided the industry's first 20nm-class 8GB DDR3 modules for notebook PCs in March.

According to IHS iSuppli, shipments of 4Gb LPDDR2 will steadily increase, taking approximately 13 percent of total DRAM shipments in 2012, 49 percent in 2013 and 63 percent in 2014, with 4Gb DRAM becoming the mainstream chip in the DRAM market around the end of 2013.
.
For more information about Samsung Green memory, visit www.samsung.com/GreenMemory