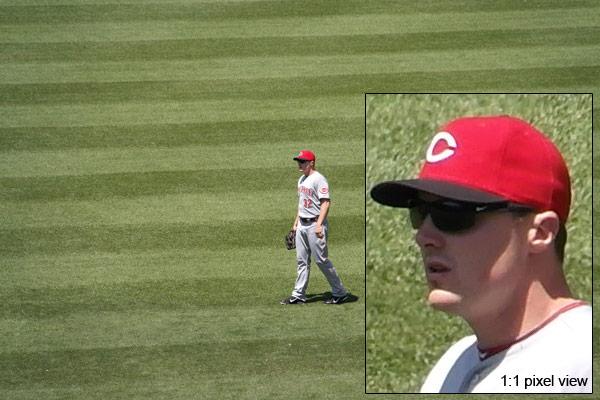 We're at Samsung's NX-series launch event at Citi Field in Queens, NY, taking a closer look at the NX20, NX210 and NX1000 mirrorless ILCs that began hitting stores earlier today (the NX1000 will arrive in June). All three cameras are virtually identical when it comes to core components like the 20.3-megapixel Samsung-designed APS-C image sensor, so performance on that front should be consistent to what we saw with our flagship NX20 sample. From a spec perspective, these are fine shooters, but the systems' high pricing and (relatively) limited lens selection aren't likely to contribute to Samsung's mirrorless success. Join us past the break for some New York Mets action through the lens of Samsung's NX20.

When's the last time you've used your camera's flash? Many photographers don't even bother to unwrap the micro-strobes included with many recent mirrorless models, instead opting to bump up image sensitivity to compensate for low ambient light. Pros care about high-ISO performance, and we do, too, so it's often a key focus of the image quality section in our reviews. Samsung had the benefit of bright, direct sunlight during today's game against the Cincinnati Reds, negating a need to venture beyond ISO 200.

To test low-light performance, we found a shaded area and bumped up the ISO, zooming the attached 18-200mm image-stabilized optic and filling the frame with a familiar object -- a business card. You can see a 1:1 view of the result below as captured at ISO 3200, 6400 and 12,800. Keep in mind that these are 100-percent crops -- noise was noticeable when when viewing the full card at a 12.5-percent view, but just barely so. In general, any of the sensitivity options (100-12,800) would be a fine fit for web use, though quality does improve dramatically at ISO 3200 and below. Color accuracy was fine when shooting in direct sunlight, but as you'll notice below, our white business card had a slight purple hue when photographed in the shade.

We also captured several minutes of the game in video mode -- again, lit by a bright, direct sun. The resulting footage looked excellent, due in no small part to the pricey ($800) 18-200mm lens on board, which turned out to be an excellent fit given our somewhat-distant stadium seating. The camera is capable of shooting up to 1080/30p video, but we bumped the bitrate down to shoot at 720p, since that's the top resolution used in our streaming videos. Details appeared sharp and handheld footage was steady, even when zoomed all the way in, thanks to the optic's built in OIS.

All in all, these are fine cameras, but beyond the bounty of WiFI-enabled functionality -- that clearly kept the marketing department busy but will likely have little bearing on purchase decisions -- there still doesn't appear to be enough on the spec or design front to pull customers away from well-established competitors, like the Sony NX series (and today's NEX-F3) and Olympus or Panasonic's Micro Four Thirds offerings. What Samsung really needs is a sub-$600 model to compete with Sony's NEX-F3 (and even the NEX-C3, which will likely remain on the market at a reduced price for some time to come). For now, the $700 NX1000 is positioned as the company's only entry-level (or "step-up") option, but should a more affordable flavor make its debut, we'll be happy to stand behind it.