What happens when you put a Chromebook in a box? You get a Chromebox, natch. Not content with launching its new Chromebook Series 5 550, Samsung's adding the Chromebox Series 3 -- a diminutive $329 desktop system -- to its lineup. Like its mobile cousin, the box runs version 19 of Chrome OS and features an Intel Core processor. Though it's clearly targeted at the education and enterprise markets, could Samsung's Chromebox be a compelling option for the Engadget reader? Can it transcend its cloud-based workstation origins? Is it a better choice than an entry-level Mac mini? Find out in our review after the break. 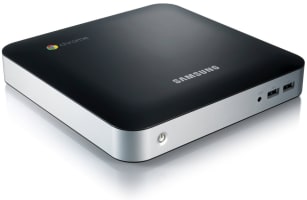 Apple should be flattered -- either that, or it should be readying its army of lawyers. Samsung's Chromebox looks very much like a Mac mini, with the exact same 7.6-inch-square footprint, rounded corners (using a smaller radius) and silver rim (made of painted plastic instead of aluminum). It's thinner (1.3 inches vs. 1.4 inches), lighter and eschews that unibody aluminum shell for a rather cheap looking matte black plastic top cover featuring prominent Samsung and Chrome logos. The bottom cover is similarly black -- it pops open without tools and incorporates a circular ridge that doubles as a rubber foot and air vent. Unlike the faceless Mac mini, the Chromebox provides a few ports and controls on the front panel -- a power switch / indicator light that glows blue, 3.5mm combination headphone / mic jack and two USB ports. A veritable legion of connectors adorns the back panel with a grounded AC socket (the power supply is built-in), DVI output (single link), gigabit Ethernet, four USB ports and two DisplayPort connectors. There's also a large air vent in the rear, along with a tiny hole hiding the reset button and a cutout for a Kensington lock behind which cleverly hides the developer switch. As a cloud-based workstation, it's no surprise that the Chromebox forgoes an optical drive (much to some folk's chagrin, we're sure) -- in fact it's even devoid of a hard drive, using flash storage instead (those crazy kids today, getting all the fancy tech).

Spec-wise the Chromebox is built around a 1.9GHz dual-core Intel Celeron B840 (Sandy Bridge) CPU with 4GB RAM and a 16GB SSD. Wireless connectivity is provided in the form of WiFi a/b/g/n and Bluetooth 3.0 radios, the latter enabling the use of wireless keyboards and mice out of the box. This differs slightly from Samsung's new Chromebook, which uses a 1.3GHz dual-core Intel Celeron 867 CPU and features a Qualcomm Gobi 3G (EV-DO / EDGE / HSPA) radio instead of Bluetooth 3.0. It's also worth noting that the Chromebox incorporates a half-decent mono speaker and that the aforementioned DVI output supports VGA displays via a standard adapter. Snap the bottom cover off, and the only user-serviceable parts are the two 2GB PC3 10600 SoDIMMs. Accessing the rest of the hardware requires a Phillips #0 screwdriver, some care and a bit of patience. We took the Chromebox apart down to its mainboard and found the power supply, an Atheros half-height mini-PCIe WiFi a/b/g/n card (connected to a pair of antennae), a Bluetooth 3.0 module, a DisplayPort subboard, a developer switch subboard and a 16GB Sandisk SATA SSD (in a mini-PCIe form factor). Interestingly, there are two unused connectors, one being a mini-PCIe socket -- for the missing 3G radio, perhaps?

Remember the Cr-48? It was powered by a 1.66GHz single core Intel Atom CPU with 2GB of RAM. Back in those early days, Chrome OS would often stumble with only a handful of tabs open. Things improved noticeably last year when the original Chromebook launched with an additional core. Still, the netbook-spec system would struggle with video playback, especially HD content. We're happy to report that with version 19 of Chrome OS running on an Intel Core processor, these problems are a thing of the past. The Chromebox handles 1080p video playback without hiccups or drama -- watching YouTube, Vimeo, Hulu or Netflix is no longer a gamble. Better yet, with 4GB of RAM it's now possible to open a few dozen tabs before noticing any performance hit. Oh, and it only takes about five seconds for the box to boot. While WiFi reception is generally trouble free, the radio often takes a long time to reconnect to known networks after waking up from sleep. This is likely a bug in Chrome OS since we experienced the same issue with Samsung's new Chromebook. We tested a bunch of common USB and Bluetooth peripherals with the Chromebox, including keyboards, mice, thumb drives and even hard drives -- all worked as expected.

Like Samsung's new Chromebook, the Chromebox runs version 19 of Chrome OS, which is available today for the original Chromebooks and the Cr-48 (dev channel only). The new OS breaks free from the confines of the browser with a desktop, an app launcher, customizable backgrounds and multiple-window support. Chrome now supports viewing both online and offline files in a wide variety of formats and features a new media player plus a built-in photo editor. Additionally, this new version provides the basis for upcoming services such as Google Docs offline editing, Google Drive integration and Chrome Remote Desktop BETA. Want to know more? Take a look at our detailed Chrome OS review. A few specifics deserve a closer look. Starting with this new version, Chrome OS includes Bluetooth support -- initially for the Chromebox (using its built-in radio) and the new Chromebook (with an external dongle), but eventually for the original Chromebooks and the Cr-48 as well. The OS also handles display mirroring and swapping, with spanning to be introduced in the future. Since PC and Mac keyboards lack the Chrome keys found on the Chromebook, the OS features a handy on-screen overlay accessible by pressing the [Ctrl], [Alt] and [?] keys at the same time. One minor feature we'd like to see implemented in the settings is a way to disable num-lock at boot for keyboards without a dedicated num-pad.

The Chromebox Series 3 is exactly what you'd expect -- a cloud-based workstation in a box. It provides the exact same functionality as Samsung's new Chromebook Series 5 550 without a display, keyboard, trackpad, battery and 3G radio. What you gain instead is a slightly faster processor, a Bluetooth radio and a smorgasbord of ports. Depending on budget, die-hard Chrome OS aficionados are probably better off sticking with the new $449 Chromebook, and we think the entry-level Mac mini is a more versatile choice for a compact desktop system. Still, despite the somewhat hefty $329, it's going to be hard for software and hardware tinkerers to resist the appeal of this extremely hackable little box.