Latest in Black and white 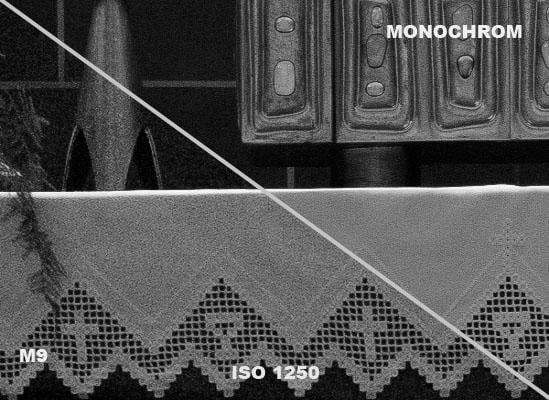 In the case of "why would you pay $8k for a black and white camera," exhibit 'A' would surely be the lack of a color filter array corrupting the image. Without one, the Leica Monochrom -- with a similar CCD to its M9 stablemate -- should have less noise. Tests comparing the two cameras on Red Dot Forum confirm it, with the Monochrom cleaner in glorious black & white at all ISO's up to the M9's maximum of 2500. Past that, a touch of NR gave the Monochrom a pleasing film-grain look to our eyes at ISO 5000, but at ISO 10,000 images started to sparkle and approach the "barely usable" range. Still, combined with the increased sharpness and resolution, very well-heeled purists might be tempted.