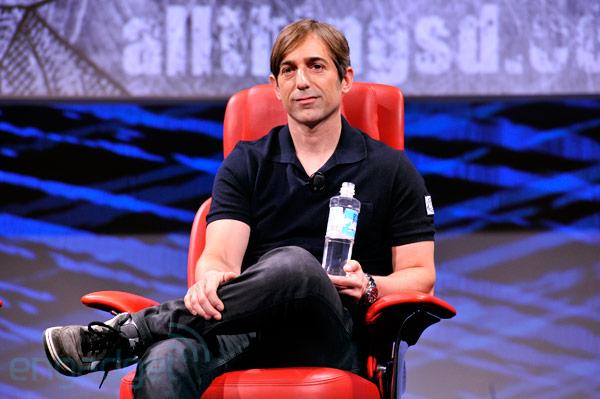 Zynga CEO and founder Mark Pincus just took the stage here at D10, and in a wide-ranging interview with Kara Swisher, he sidestepped conversation about Words With Friends and Farmville long enough to touch on the murky world of console gaming. In a bid to quell any potential surprises at E3 next month, Mark said outrightly that his company is not interested in getting into the console world. "We're aiming for you," he said while pointing at Swisher. "We're going after the mainstream market. There's too much friction [in the console world]."

He also made clear that he tries to not look too far ahead of where the world really is. When talking about the undeniable shift to mobile, he made clear that there's still a huge amount of desktop traffic on Zynga's games -- "lots of people play while bored on conference calls at work," he quipped. It's an interesting viewpoint in a world where PSN and Xbox Live Arcade has given independent developers all new distribution platforms to reach users, but it also highlights the outfit's intrinsic attachment to Facebook in particular.

In response to a question from The Verge's Josh Topolsky -- focused on extracting information about Zynga's plans on operating as a fully detached company that didn't necessarily rely on Facebook for practically all of its revenue -- Mark offered the following regarding its plans to move forward:

"We've never thought in terms of attachment or detachment from Facebook. There's nothing stopping us from putting games in all kinds of places, as we find opportunities. Facebook has met our 90-10 rule [related to explosive growth potential], making it worthy of more and more investment. We're just seeing Android and iOS having the potential to be there. I think about this like the evolution of TV -- at the beginning there may have been one or two channels, but what really happened was that people genuinely wanted to watch TV. It wasn't created by the networks. There was a relationship between us and content -- us and Mad Men, or whatever your show is. Eventually, we found each other, and I think the same is true with play. I think we will go anywhere that we see the potential to make it social.

We see Facebook as a platform, just as we see iOS and Android. We're not worried that we'll get too attached to iOS and Android. We'd love to have a much bigger business on those platforms; if they became a huge concentration for us, I don't think we'd feel that we didn't have a business, we'd be excited that they grew that much."

It's curious because PSN and XBLA are arguably just as social as Facebook-based gaming, but of course, there's a lot of difficulty in porting, getting agreements with the platforms, etc. We also couldn't help but notice Mark's answer to Kara's prodding around Angry Birds. When asked if Zynga considered buying Angry Birds from Rovio, he said that the two "had talked," but we certainly got the impression that those discussions didn't last too awfully long. Wonder if that means we'll ever see 'perturbed fowl' as a Draw Something clue....