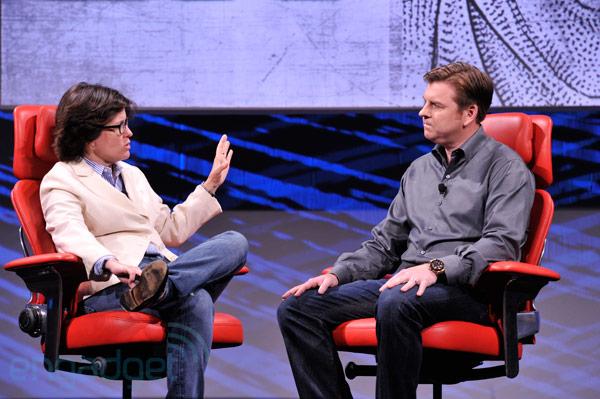 Skype CEO Tony Bates just took the stage here on the final day of D10, and he got right into the news delivery mindset: as of now, there are 250 million monthly connected users. Said Bates, "When we closed [the Microsoft deal], we had 170 million monthly users, so haven't skipped a beat in terms of momentum." Continuing on when asked from Kara Swisher about integration with Microsoft, Bates said: "I'm not going to talk about future products, but I'll steal a line from Tim Cook. We're going to double-down on integration with Windows 8, and we're doing to double-down on secrecy." Specifically, he mentioned that there'd be some "great integration points" with Windows 8, noting that Skype is viewed as an "experience, with most folks viewing it as a Swiss army knife, regardless of where and how it's used." Kara followed up with a question on Kinect, and Bates did his best to dodge the bullet by re-referencing intent on Windows 8 and Windows Phone -- there wasn't a peep mentioned in either direction on if it'd end up there.

Kara asked what his most important smartphone platform was, and Bates said: "I wouldn't classify it as one most important. As far as download numbers, it's absolutely iPhone, but Android is gaining momentum. Our top priority is mobile; we made two acquisitions in that space. The Android marketplace -- as many know -- is quite fragmented, and this was a big challenge for us from an engineering standpoint. This team in the Qik acquisition really helped us there. I'm very hopeful -- Windows Phone is very exciting for me because of that people-centric nature." Kara pushed to see if Windows Phone would get a "special" version of Skype, and Bates simply said that he "hopes they can add value." Given that both Windows Phone and Skype now live under the same roof, though, we're guessing that he's underselling things in the effort of "doubling-down on secrecy."

From a more broad perspective, Bates confessed: "We still have a ways to go on the overall communication method. A simple example that bothers me a little bit -- over 50 percent of our traffic is now video communications, and we've worked hard to make that a better experience over time. But, none of these new phones have indicators that video is rolling -- in my world, why shouldn't we have a pervasive way to have full video communications?"

Kara followed up by asking if there'd be a Skype Phone, and Bates stated: "To clarify, there was a Skype phone with Three in the UK. It is a very strong brand -- but, no plans right now for a communication device surrounding Skype."

Kara just had to go back to Kinect, asking the same question in a different way. In response, Bates said: "Well, my kids love Kinect. It's more powerful than just an input for a gaming device. Microsoft sees a whole suite of inputs; Kinect is about human recognition and gesture control in general. Where we'd play with that is just one of many inputs. For us, it'd be adding a communications layer as a service. I can't talk about anything in the future. We see the world as having what you want, when you want it; the living room is a very important area. Sometimes families and businesses, they want a simple way to communicate. There were questions on whether that leanback experience was right, but I just see it as one of many inputs. We've been focused on the living room to not just enable Smart TVs, but we launched a product that kind of neutralizes that in some ways by just plugging it into any HDMI port."

When Kara asked what was "most important to Skype," Bates offered: "Without a doubt, mobile. There's a shift to mobile apps; I'd like to see a more pervasive communications experience and I think Skype can contribute to that. Mobile brings differences in architecture, so we're working very hard on that right now. One of the things we've done in the past seven months is the ability to leverage very strong data assets. We've converted 25 percent of the client base, silently, to a new backend. It's helping us to scale the mobile architecture. We've done some things with Bing; integrated the Bing Toolbar in the integration -- some of the early pieces of it."

Kara then pivoted to Facebook, to which Bates stated: "Facebook approached us (or we approached Facebook at the time) with a shared vision. We're sort of the inner circle of many lives. It's the story of someone overseas who gets to see their baby being born on Skype. When we talked to Facebook, we share a lot of things regarding communications. When I sat down with Mark, there was a great match there. We deployed a very integrated service with Facebook, and it's gone extremely well. There's opportunities in the future, potentially, but right now we're on the same page with the partnership."

Kara then asked how he gets to the next 250 million users, and if Facebook plays a part. Bates then stated: "They're the partner of choice. I think the bigger part is the assets we see in Microsoft -- with Windows Reimagined, there's huge opportunities. On mobile, we're at the very early stages. We're not disclosing individual mobile users, but the majority is still PCs. My job is to create experiences that work across all forms -- the living room is just as important, and tablets I view as crossing from desktop to mobile."

From there, Kara asked if tablets were growing as fast as mobile, but Bates said that "no, mobile is definitely fastest."

Taking things in an entirely new direction, Kara then asked if Tony would ever be interested in "running Microsoft." Tony said: "The simple answer is that I'm loving what I'm doing at Skype. I've only been at Microsoft seven months. Steve [Ballmer] has been great, but it hasn't come up in discussion. Would I like to run a company? Well, I did run a company, and I enjoyed running it. Let me tell you what I enjoyed about it: I had wanted to become a CEO before I was 45 -- it's just a goal I wrote down. We write them usually on New Year's Day with our kids, and we review them the next year. It's kind of amazing how many come true; you don't keep changing them or anything. The thing that I enjoyed about being a CEO was shaping the culture, and sort of revitalizing the product focus and taking us into new areas. Skype is kind of amazing -- look at Skype in the classroom, those are things that can really excite your organization. That's what has been really great to me."

Kara then ventured into reasons for acquiring GroupMe and Qik: "Well, they're both in mobile," said Bates. "The way we use Skype is in groups, and there was great underlying technology there."

Kara reverted back to goals for this year, to which Bates said: "Well, they're quite personal this year. Kinect isn't on there [laughs]. There's really a vision to accelerate Skype -- if get to a billion, I think we'll be really happy with that."

When it came time for Q&A, The Verge's Josh Topolsky asked Bates is he had any plans to overhaul the user interface for the Mac build of Skype, which Josh clearly was no fan of. After receiving some applause from the (obviously in agreement) crowd, Tony offered: "All I can say is that we're going to continue to look at it and try to offer the best user experiences. User interfaces are certainly subjective."

When questioned about interoperability from a YouTube employee, Bates stated: "We have developer kits, and yes, it's very critical to what we do."

Finally, it's clear that Bates is thinking about long-term changes, noting that "it's clear that we aren't done. Look at webcams -- soon, we'll have them everywhere, and then 720p and then 1080p." Talking specifically about carrier relationships after questioned by ABC News' Joanna Stern, he offered: "You can't talk about them in a broad brush way; everyone's different in their business models. In some cases, carriers see Skype as a threat. At last count, we're doing 1.4 billion minutes of voice and video per day. But, we're generating a huge amount of data. We know we can work together. This morning, I saw that Verizon's pushing Skype as a major app on LTE phones. We're working through those, but I see the model evolving. We tend to work really well together. I think you'll see more positive relationships than negative over time."

In this article: all things d, all things d 10, all things digital, AllThingsD, AllThingsD10, AllThingsDigital, atd, atd10, atdx, calling, ceo, conference, d10, dx, skype, tony bates, TonyBates, users, voip
All products recommended by Engadget are selected by our editorial team, independent of our parent company. Some of our stories include affiliate links. If you buy something through one of these links, we may earn an affiliate commission.
Share
Tweet
Share