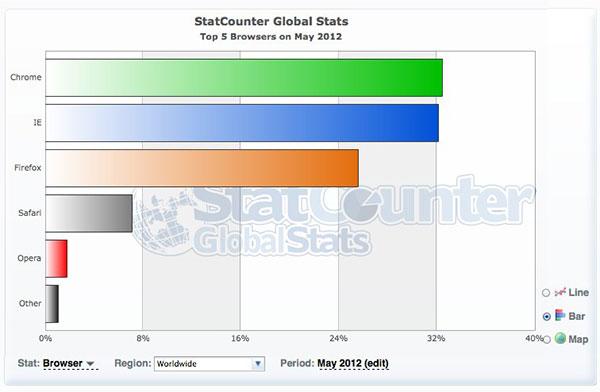 Chrome's share of internet use just inched past Microsoft's Internet Explorer last month, laying claim to king of the web browsers. StatCounter's analytics measured that 32.43 percent of its 15 billion page-views were done on Google's browser, while Internet Explorer took 32.12 percent and Firefox 25.55 percent. According to StatCounter, an upswing of over 0.6 percent to Firefox (from Internet Explorer) helped Chrome claim the top spot. The month rounds off some impressive growth for Chrome in 2012, which claimed second place in StatCounter's results at the start of the year. Now, if Google could just get that mobile version out to more handsets, we could see how it fares against small-screen competition.

In this article: browser, browser share, BrowserShare, Chrome, Firefox, Google, Internet Explorer, InternetExplorer, Microsoft, statcounter
All products recommended by Engadget are selected by our editorial team, independent of our parent company. Some of our stories include affiliate links. If you buy something through one of these links, we may earn an affiliate commission.
Share
Tweet
Share