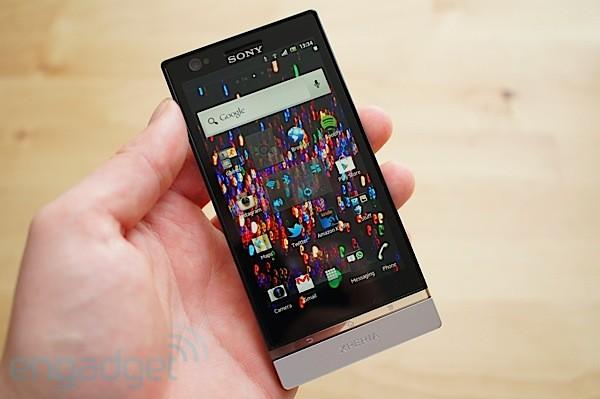 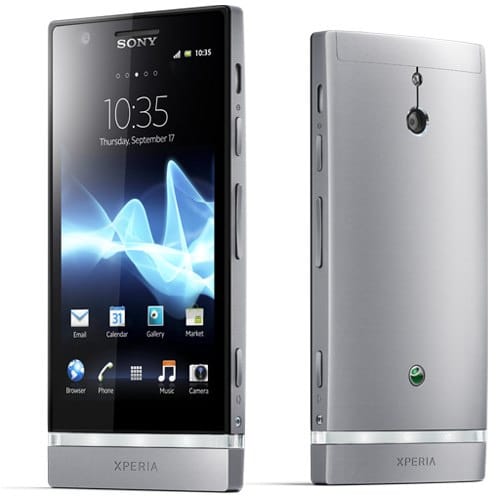 As the middle child from Sony Mobile's NXT family, the Xperia P steps out from behind the Xperia S' shadow with its own 4-inch screen -- and a touch of WhiteMagic. Screen technology aside, the phone's design follows a path very similar to Sony's latest flagship and picks up a few quirks of its own on the way. The see-through button strip is actually touch-sensitive on Sony's 2012 middle-weight -- a curious oversight on the bigger model.

It packs Sony's 8-megapixel Exmor R camera sensor (likely to be the same one found in the Xperia Arc S), a dual-core 1GHz processor and just under 13GB of user-accessible storage. But there's one unfortunate Xperia trait here -- we're still playing with Android Gingerbread, even while its ancestors begin to dip their toes into Ice Cream Sandwich. Does anyone want an incrementally smaller Android phone from Sony? And what exactly is WhiteMagic and what does it mean for the battery life? The Xperia P stands behind the flagship S, but surprises with better build quality and a superbly visible screen. Placed squarely in the middle of Sony's smartphone line-up, its battery woes are the main concern.

How would you rate the Xperia P?
We want to hear what you think. Post a quick review now to join the conversation!
Write a review

The instant you unfurl the Xperia P from its delicately designed (and presumably eco-friendly) retail box, you'll think of the Xperia S. Sony's consciously designed the current Xperia trio to match each other, from the squarish corners to the see-through strip that embellishes the base. The Xperia P can shed its lower cap, although this doesn't open up access to anything -- the micro-SIM slot exists on the left edge and there's no expandable storage option. Unlike the Xperia U, the notion of exchangeable caps has also been overlooked -- the phone will arrive with the single, matching cap -- and you'll have to hope a friend's willing to swap if you're looking to shake up the design. While the majority of the back is hewn from aluminum, both the aforementioned cap and a region on the top edge miss out, coated instead with plastic. It's just off-color from the aluminum bulk, tempering what is otherwise a fine-looking handset.

The phone is a little thicker (10.5mm) than what we're starting to become accustomed to, but it's nigh-on identical to the Xperia S. Due to the smaller 4-inch (540 x 960) screen, it feels more at ease in the hand. In general, the phone makes a lot of ergonomic sense. All the physical buttons are placed on the right edge, with the two-stage camera shutter appearing where it would on any typical point-and-shoot. It's joined by the volume rocker, the power switch and a metallic mesh guarding the loudspeaker. The grill is curiously parallel to the curved edge, not the flatter front face, but it's a minor curio. On the opposite side, there's the micro-HDMI and micro-USB port. The micro-SIM slot is accessed by removing a pretty flimsy cover that feels like its made of the same aluminum material of the phone, but looks oddly out of place.

The curved backing includes the primary camera sensor (there's a VGA camera on the front) and flash, with a Sony Ericsson Mobile icon floating just above the clear strip. Flipping the phone around, the Xperia P's screen is surrounded by a curiously heavy bezel both at the top and bottom. The top bezel includes the ear piece, some slightly crammed-in Sony branding, the front-facing camera and light sensor. It's equally thick below the screen, and while this gives the phone a sense of balance (and congruence to its relatives), the result is a waste of space.

While the phone beams out from a 4-inch TFT display, Sony's added its own additional white subpixel to the typical RGB setup, as design it calls "WhiteMagic." What does this mean in real life? Well, you won't need to swing the brightness level to full whack to use it. Even better, at full brightness, this is the most readable screen we've ever used outdoors. In the middle of a sudden heatwave in the UK, the Xperia P is able to push enough effort into that extra subpixel to make a real difference in tricky lighting. Let's take a (much) closer look:

The pixels are pretty densely packed together, explaining the relative crispness, while each RGB group is joined by a white subpixel to improve visibility. The display otherwise behaves like many other recent qHD display. Color reproduction is excellent, viewing angles are good (and are boosted at higher brightness levels) and it thankfully avoids any discoloration issues at off angles, unlike its AMOLED rivals.

Sony has a pretty good track record with its camera sensors, especially on its middle-of-the-road smartphones. Thankfully, the Xperia P follows this trend, with an 8-megapixel camera capable of crisp images -- though you can expect some noise when in lower light. The camera's dynamic range could also do with some work -- subjects were often washed out when strong lighting was involved. On the whole, Sony's automatic scene mode is capable of capturing some nice stills without diving into the settings. These include the sweep panorama modes and 3D angled stills courtesy of Sony's myriad electronics verticals.

Video recording is similarly pleasing. Despite its size, the Xperia P is capable of capturing 1080p video, presumably due to the dual-core processor not seen on last year's Sony phones. For our sample, we kept to the 720p setting and the result is a crisp video, with the phone both adjusting to focal and lighting changes quickly.

Sony managed to eke out a respectable performance from its single-core phones, but it's made the change to an ST-Ericsson U8500 dual-core processor here. Our renovated benchmarks prove that it doesn't quite match the dual-core 1.5GHz Qualcomm MSM8260 found inside the Xperia S, but it does give some respectable scores (some less so) that are backed up by our own experiences. Using the Droid RAZR for dual-core comparison, Sony Mobile's new chip choice doesn't quite equal the competition in raw numbers.

During our typical use, the phone kept up with what we needed it to do. It survived our web browsing sessions and lightweight games with relative ease. The SunSpider score reflects our own experiences -- perfectly manageable but not nearly as smooth as other Android phones. It also lacks the graphical punch of the bigger phones. More intensive games could run, but weren't all that smooth. Touchscreen controls on a 4-inch display also felt a little tight in this age of bigger screens. Around 13GB of storage is passable for our apps and photos, but the lack of substantial built-in storage or a microSD slot continues to irritate. That's despite Sony continuing to offer 50GB of free cloud storage through Box if you register the device before the end of 2012.

The Xperia P's 1,305mAh battery isn't able to offer up enough hours of on-time for us, though. In our video run-down test, the phone is only able to eke out just over four hours of playback, with brightness set at 50 percent and WiFi on, but not connected. We found ourselves limiting use of the phone during the day for fear it would run out before we got somewhere to charge it -- something it often did when we were using it outdoors at higher brightness settings. The battery is also non-removable, which makes it an even bigger bind for those that like to add some insurance with extra batteries. We level the blame at Sony's WhiteMagic display. Presumably, those extra subpixels really take their toll on battery consumption. You'll have to balance out superb outdoor visibility against reduced battery life.

The phone runs on quad-band GPRS (850, 900, 1800, 1900) and HSPA (850, 900, 1900, 2100), with speeds to 14.4 Mbps down and 5.6 Mbps up. In the middle of London, we got speeds of around 4.5Mbps down and 500kbps up -- not superb, but comparable to our other devices in the same location. Call quality is typically strong, with good noise cancellation on busy streets. If anything, the earpiece could benefit from being a little more potent. While our test calls were fine on the other end, we often had trouble hearing their replies in busy situations.

And we're back to another frustration -- the spectre of late Android iterations. Again, we're handed a new phone, in the middle of 2012, with Gingerbread. Fortunately, Sony's own tweaks add some extra functionality to it, but theses certainly don't come close to the slickness and joined-up design of Google's fourth mobile OS version. Features like text selection and task switching are greatly improved on the 2.3.7 build to which Sony has added its own app folder function and some middle-weight Facebook integration that neatly dovetails your contacts there with your phone book. Like preceding Sony phones, the app tray navigates from left to right, with the ability to sort them by frequency of use, alphabetically and freshness. Sony's app bloat and widgets were relatively unobtrusive (with the exception of the McAffee antivirus program) and are complemented by Google's stock versions -- at least we had a choice. The phone also packs similar NFC capabilities to the Xperia S, although it lacks the in-box SmartTags of the bigger device. Both Sony's Music Unlimited and Video Unlimited media services arrive ready to go on the device, although we have no more willingness to use the stores since we toyed with both on the Tablet P. The Xperia P also misses out on PlayStation certification for some reason -- odd given that older devices are now enjoying a limited selection of Sony's gaming catalogue. Like the Xperia S, the phone is ready to share your media, with a mini-HDMI cable even boxed with the phone -- likely in exchange for those NFC tags.

The Xperia P is a confident, middle-sized handset, but new smartphone shoppers may find it difficult to spend £340 (around $530; off-contract) on it. While the Xperia P has more design charm and better build quality, the Xperia S is already being substantially discounted in the UK, with a grander camera, larger screen and more capable processor. However, big phones aren't for everyone and the Xperia P's footprint lies closer to the iPhone than recent pocket-testing smartphones. It's not going to beat the competition on raw benchmark numbers, but nor did any lag or hiccups frustrate us during testing -- something that other Android phones are still capable of. Another concern is that if someone is looking to buy a small smartphone, they easily could go for the smaller-again Xperia U, which has its own (if slightly brash) design quirks. That shouldn't ruin what the P model can offer; a bright qHD screen that's a revelation in sunlight, with a stable -- but tired -- OS that's promised an ICS update soon. If Sony can follow up on that promise, then the Xperia P might avoid slide into obscurity that several of its phones have suffered from.

In this article: 4-inch, 8-megapixel, Android, Android 2.3, Android 2.3.7, Android2.3, Android2.3.7, Gingerbread, mobilepostcross, review, Sony, sony ericsson, Sony Xperia P review, sony+xperia+p, SonyEricsson, sonyxperiap, SonyXperiaPReview, video, WhiteMagic, Xperia, Xperia P, XperiaP
All products recommended by Engadget are selected by our editorial team, independent of our parent company. Some of our stories include affiliate links. If you buy something through one of these links, we may earn an affiliate commission.
Share
Tweet
Share