NASA ramps up its efforts to understand space weather 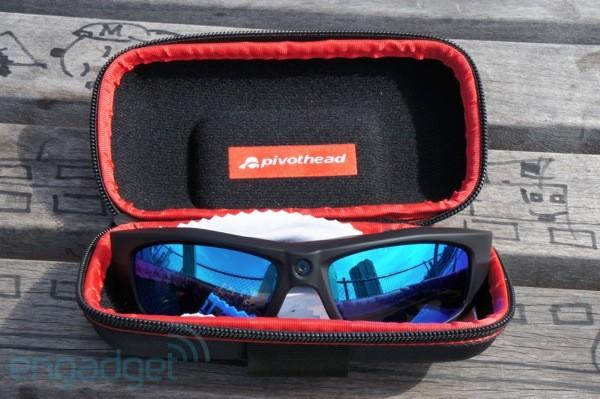 We won't mince words -- the Pivothead Durango have a decidedly "sporty" style that probably won't win it too many fans. But, if you're in the market for some POV video action, chances are style isn't particularly high on your list of must-have features. They have the appearance of low-key, but bulky Oakley knockoffs. But again, if you're hurtling yourself down a hill on a snowboard, how cool your specs look is probably secondary to recording high-quality video and absorbing a beating. So, we promise, this is the last you'll hear about how unsightly these things are. (And they are just that -- ugly.) Once you head past the break we'll have video samples, photo samples and field tests, but nary a word about how embarrassing it is to walk around in public with these on. Promise. So, join us below as we put Pivothead's video sunglasses through their paces.

Be the first to review the Durango?
Your ratings help us make the buyer’s guide better for everyone.
Write a review

Physically, there's not much to the specs. They're comprised of a relatively soft, matte plastic with a slight give that should keep them from shattering easily in the event of an impact. In total there are four styles, all with a few frame and lens color options. Our pair, the Durangos, were black with the highly reflective "glacier blue" lenses. Smack dab in-between those, near the bridge of the nose, is the 8-megapixel CMOS sensor from Sony that forms the heart of the gadget. The camera is reasonably conspicuous, recessed into the frames and surrounded by a protective bezel. Simply put, there's no way you could have a conversation with someone without them noticing it. From a distance though, they just look like a pair of unusually bulky eyewear.

All of the controls and the micro-USB port are housed in the left arm, along with a heatsink, which keeps the electronics and battery from melting the plastic frames. To hide all that hardware, the arms need to be pretty thick -- measuring in at a hefty 11mm at their widest. On top is a rocker: press it forward to record video and back to capture a photo -- simple enough, right? Sort of. See, if you hold down the front toggle for four seconds it cycles between video modes. Hold the rear toggle and it flips through focus modes: auto, fixed and continuous auto. The only problem is, which mode you've changed to is indicated by a trio of LEDs on the inside of the arm that are not only cryptic, but impossible to see while wearing them. There are other options, such as a macro mode, but you'll need to fire up the desktop software to switch to those. On the underside of the same arm is the power button and the micro-USB port, which does double duty -- charging the glasses and turning them into a mass storage device so you can remove your photos and video from the 8GB of internal storage.

While the Pivothead glasses are bulky for a pair of specs, they're still far more discreet than say a GoPro or other helmet cam. Beyond the lack of mounting hardware, it's just easier to carry around or quietly capture video and photos without others noticing... as long as they're not paying particularly close attention. You will look slightly odd if you keep touching your temple.

Believe it or not, there's actually a software component to Pivothead's offering, though, we'd venture to guess you could use these things for quite some time without ever needing to fire up the desktop app. Sure, it's handy for quickly switching between a few pre-set video modes, but the default settings worked well enough for almost everything we threw at it. One of the settings relegated to the app is macro focus mode. While it's nice to have the option, we can't imagine ever holding anything close enough to our faces for it to really be necessary. The Windows app worked exactly as we expected it, easily changing settings on the glasses and pulling our media off. But the Mac version was a little more fickle. It was a bit buggy and locked up completely when we clicked to button to transfer our photos and videos to our MacBook.

The only problem with manually setting the exposure compensation or ISO, is that you can't change them back on the fly.

The program provides access to a number of "quick" setting video modes optimized for sports, power savings and hands-on, along with a few others. Manually you can also set the focus mode and turn on or off features like face-tracking and audio recording. Those fine-grained controls extend to still captures as well, where you can choose between 200, 800 and 1,600 ISO. The only problem with manually setting the exposure compensation or ISO, is that you can't change them back on the fly. So, if you're still out when the sun goes down but have the exposure set for bright conditions, you'll be out of luck.

That is, at least until the Air Pivothead WiFi Drive hits shelves in July. Sadly, we couldn't get one in time for the review, but eventually it will allow you to quickly preview images on your mobile device and even change the camera's settings. There's an iPhone and iPad app that should be in the App Store very soon, and an Android version is in the works.

Honestly, we have very little to complain about when it comes to the quality of the product produced by Pivothead's video recording eyewear. Was it as crisp or clear as, say, an HD Hero 2 or Contour+? No, but considering it was only an 8MP sensor crammed into the body of a pair of knock-off Oakley sunglasses, we didn't expect it to be. The 1080p and 720p clips coming out of the specs were definitely a step above your average smartphone or pocket camcorder. When panning about quickly there's some noticeable skew to the images, but it's hardly a deal-breaker and, if you can keep your head relatively steady, the cam picks up a surprising amount of detail even when charging down a hill at about 26MPH on a bike. What's more, the on-board mic had no trouble picking up our narration (as you can see in the video above) even while moving at such high speeds on a windy day. Sure the "wind-resistant" recording isn't quite as resistant as we'd like, but rarely did the roar of the gusts overpower our voice.

The on-board mic had no trouble picking up our narration even while moving at such high speeds on a windy day.

Still photos, though difficult to frame, were crisp, bright and well saturated in the right conditions. In strong sunlight, images tended to get slightly washed out and were prone to glare, which we suspect has something to do with the highly reflective lenses. Then again, photos are probably secondary to video for most people willing to cough up $349 for a pair of Pivotheads. Things, unfortunately, weren't so satisfying when the lights go down in the city. Under dim, artificial light indoors, photos were grainy with muted colors, while outdoors and away from the hum of fluorescent bulbs, images were extremely dark with a yellowish or reddish hue.

Our lone major qualm was the lack of consistency, though we expect at least some of that has to do with the lack of a viewfinder and our inability to preview shots. Upon reviewing our clips and photos we noticed that the sensor would lag sometimes as we moved from the shade out into the sun.

Having tried any number of rugged and first-person video recording options, we were initially a bit skeptical of how the Pivothead would stack up. The sensor was smaller, the pixel count lower and the price higher than many of its theoretical competitors. But, we were pleasantly surprised with them -- despite our initial hesitation over their aesthetics. Image quality was occasionally inconsistent but, when when it was good, both detail and color quality were far above average. What's more, operating the glasses is simple and intuitive... so long as you're willing to accept the default settings.

Our complaints come down largely to design and price. And we're not just talking about the CVS bargain rack looks. In particular the placement of the indicator LEDs left us frustrated during the testing period. Additionally, the $349 price tag is a bit hard to swallow. While we wouldn't call it a deal-breaker, it's clear that you'd have to have a very specific set of requirements to choose these over a GoPro HD Hero 2. Such offerings deliver better image quality and are more durable, but they're also far more inconvenient to use and less discreet. But, if you're looking for a simple way to catch some POV video without the need for cumbersome mounts, these guys offer a compelling alternative.

The winner of the 2011 3M In-New-Vation award, Pivothead brings unparalleled advancement and convenience to the point-of-view (POV) video category. Matching the imaging dexterity and quality of full size cameras and camcorders, Pivothead's technological features include:

Developed for over two years by a team of optic industry veterans, the hands and mount-free platform was pursued to deliver true POV capabilities to markets beyond the action sports category. In addition to the social and recreational applications, the capabilities of professional-grade imaging technology, miniaturized and embedded in the most ergonomically human platform - eyewear - provide a wide range of possible uses in a variety of industries, such as law enforcement, education, medicine, journalism and entertainment.

"We're excited to be launching a world-class product that will serve as the ultimate content-creator across diverse applications that are currently all trying to migrate more seamlessly to the online world. Equally importantly, the variety of styles are lightweight and look good so these are glasses people will actually want to wear" said Pivothead founder Christopher Cox. "Judging by the time and attention corporate tech behemoths have been paying to the wearable technologies market, we are confident that Pivothead stands at the forefront of a category that will soon see mainstream adoption."

About Pivothead Founded in 2010, Pivothead is a motley crew of adventurous innovators bent on revolutionizing behaviors surrounding peoples' interaction with imaging technologies in their daily lives. Pivothead's High-Definition -- Hands Free™ video platform liberates video creation by providing new realms of possibility for people of all walks of life to capture new and unique perspectives that pre-Pivothead, have either been too inconvenient to capture, or just downright impossible. Pivothead is dedicated to staying on the cutting edge of various technologies. Incorporating the best imaging quality and dynamic camera features will always important, but pushing the envelope beyond the scope of the traditional digital camera is our mission. With ever more bold development projects in our design pipeline, we are keen on making our devices integrate and communicate in a useful way within an ever-connected digital and wireless ecosystem that we increasingly find surrounding our lives.