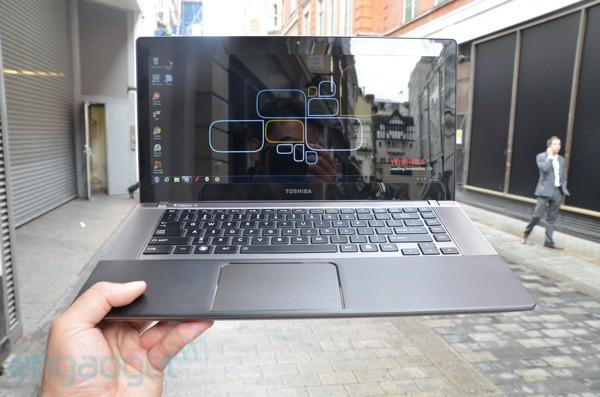 It's a shame we have to write headlines -- we would have invited you to guess what screen size you're looking at on that Ultrabook up there. Alas, though, you can read, and that funky-looking laptop is indeed the Toshiba Satellite U845W (or U840W in Europe). Its display measures an unusual 14.4 inches diagonally, which translates to a severe 21:9 aspect ratio (and 1792 x 768 resolution, in this case). All told, it's the first panel of its kind to be used in a PC. But who's it for, exactly? Toshiba reps said the aspect ratio is meant to mimic a movie theater screen, despite the fact there's no Blu-ray drive onboard. They also imagine people using that real estate for multitasking and getting work done in cramped airplane quarters.

It's also meant to get your attention. Everything about it seems designed to make a statement: the machined aluminum design, the soft-touch accents, the backlit keyboard, even the metal FCC plate and chrome-ringed feet. The machine's also decked out with Harman Kardon speakers, like other Toshiba laptops, along with amenities like sleep-and-charge and sleep-and-music ports. You'll also find an Ethernet jack, HDMI output and three USB 3.0 sockets. It's a bit ironic, then, that the weakest bit seems to be the display -- with a TN panel like that, we're not expecting jaw-dropping viewing angles.

On the inside, it runs your choice of Ivy Bridge processor, though the storage varies wildly depending on how much money you're willing to pay: at the entry level you get an HDD starting at $999, but the top-tier configuration nets you 256GB solid-state drive. The weight is also likely to vary depending on which you choose: though these specs aren't final, Toshiba is saying a machine with a spinning hard drive should weigh "just under" four pounds, while an SSD-packing machine should come in at about 3.5. The company is also staying mum on battery life for now, though we're hearing a tentative range of eight to ten hours, at the high end. The U845W is expected to go on sale in the next couple of months, and until then we've got hands-on galleries below and a video after the break.

Sharif Sakr contributed to this report

In this article: 14 inch, 14-inch, 14-inch ultrabook, 14-inchUltrabook, 14.4 inch, 14.4-inch, 14.4Inch, 14Inch, laptop, laptops, Satellite, satellite u840w, SatelliteU840w, Toshiba, Toshiba Satellite, toshiba u840w, toshiba u845w, ToshibaSatellite, ToshibaU840w, ToshibaU845w, u840w, u845w, Ultrabook, Ultrabooks, video
All products recommended by Engadget are selected by our editorial team, independent of our parent company. Some of our stories include affiliate links. If you buy something through one of these links, we may earn an affiliate commission.
Share
Tweet
Share