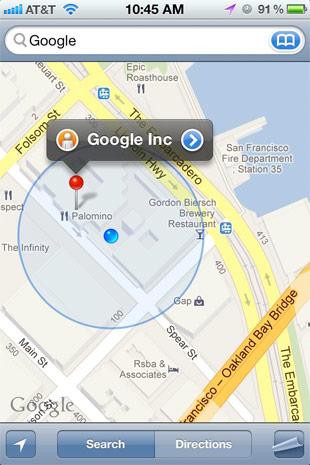 There was a Google event today, but you'd hardly know it based on the Q&A session. Question and question was hurled at Brian McClendon -- Vice President of Engineering for Google Maps -- surrounding Apple. With discussion around Apple's desire to introduce a mapping system of its own in iOS 6 to unseat Google from its preloaded app selection, Brian fielded lots of inquiries on the matter. He did an admirable job of dodging the obviously asinine bits, but continued to impress upon the crowd that Google itself was "committed" to bringing all of the features in Maps -- 3D, offline, turn-by-turn, etc. -- to iOS and other platforms.

That was largely in response to a question as to why Google Maps Navigation for Android was so superior to Maps on iOS, but honestly, it's hard to know where the truth sits. We've heard that politics have kept the two sides from coming to terms, but it's pretty clear that Google's more than happy to bring its world-class mapping platform to other mobile operating systems... so long as terms are agreeable, naturally. The good news is that 3D maps will be coming to Android and iOS "in the coming weeks," which makes one wonder if iOS 6 will be available for some time. As for offline on iOS? Your guess is as good as ours, but it sure sounds as if the ball's in Apple's court. Can't we just all play nice, guys?

In this article: 3d, 3d maps, 3dMaps, Brian McClendon, BrianMcclendon, google, google maps, GoogleMaps, guidance, ios, maps, mobilepostcross, peter birch, PeterBirch, turn-by-turn, windows phone, WindowsPhone
All products recommended by Engadget are selected by our editorial team, independent of our parent company. Some of our stories include affiliate links. If you buy something through one of these links, we may earn an affiliate commission.
Share
Tweet
Share