Jetway, maker of motherboards, is prepping its first smartphone, the Alfar 560 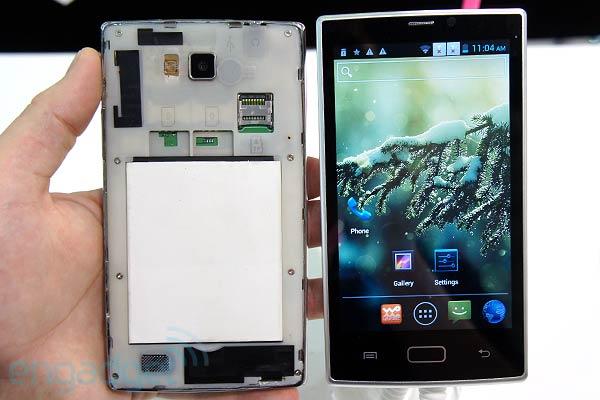 We'll be honest: we originally made our way over to Jetway's booth here at Computex because we had heard scuttlebutt that a KIRF Samsung Galaxy Note was on display. Turns out, that wasn't true -- this thing doesn't even support pen input! -- but as it happens, Jetway had an interesting story to tell nonetheless. Jetway, based in Taiwan, has until now been designing motherboards, but is now releasing its first phone. What you see there is the Alfar 560, a reference design that various OEMs can rebadge under their own names. Based on the specs, it's clear that whatever brand picks this up, it's going to be a low-to-mid-range device: vitals include a 650MHz MTK6575 CPU, a 5.1-inch (800 x 480) display, 512MB of RAM, Bluetooth 2.1, a pair of 0.3- and 5-megapixel cameras. Additionally, it's dual-SIM-capable, with support for both WCDMA and GSM.

If all that sounds ho-hum, we'll remind you that we haven't seen that many low-end phones with screens this huge, and the design here is actually decent, aside from the fact that the phone is chunkier than whatever flagships HTC and Samsung have to offer. If you're reading this in the US, you probably won't ever get to see it in person, but you just might get to handle it if you live in Asia, the Middle East or South America -- Jetway says it expects the 560 to eventually arrive in those three regions. Wherever you are, feel free to rubberneck at the photos below, and check out our quickie video after the break. In this article: 5.15 inch, 5.15-inch, 5.15Inch, 560, alfar 560, Alfar560, computex, computex 2012, Computex2012, hands-on, jetway, jetway 560, jetway alfar, jetway alfar 560, Jetway560, JetwayAlfar, JetwayAlfar560, mobilepostcross, MTK6575, reference design, reference designs, ReferenceDesign, ReferenceDesigns, video
All products recommended by Engadget are selected by our editorial team, independent of our parent company. Some of our stories include affiliate links. If you buy something through one of these links, we may earn an affiliate commission.
Share
Tweet
Share