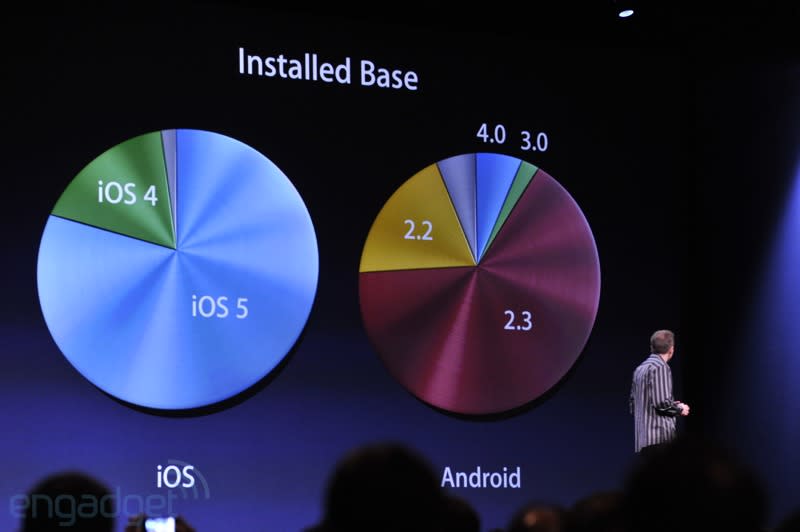 Apple has never shied away from taking a few shots at Android during its WWDC keynotes, and why would 2012 be any different. Just before taking the wraps off iOS 6, Apple took some time to toss out a few numbers highlighting its spectacular sales and sizable user base. All told, by the end of March, the company had moved 365 million iOS devices, with the vast majority of them (80 percent) running iOS 5 -- a point they made sure to drive home with a graphic comparing the install base of Android 4.0. But, sales alone mean nothing without an active user community. Which is why Cupertino was so happy to report that 140 million iMessage users were sending more than one billion messages each day, for a grand total of 150 billion SMS and MMS missives. Push notifications have also clearly taken off in a big way, with 1.5 trillion having graced our notification screens. 5
In this article: apple, imessage, ios, keynote, mobilepostcross, numbers, sales, stats, wwdc, wwdc 2012, Wwdc2012
All products recommended by Engadget are selected by our editorial team, independent of our parent company. Some of our stories include affiliate links. If you buy something through one of these links, we may earn an affiliate commission.
Share
Tweet
Share