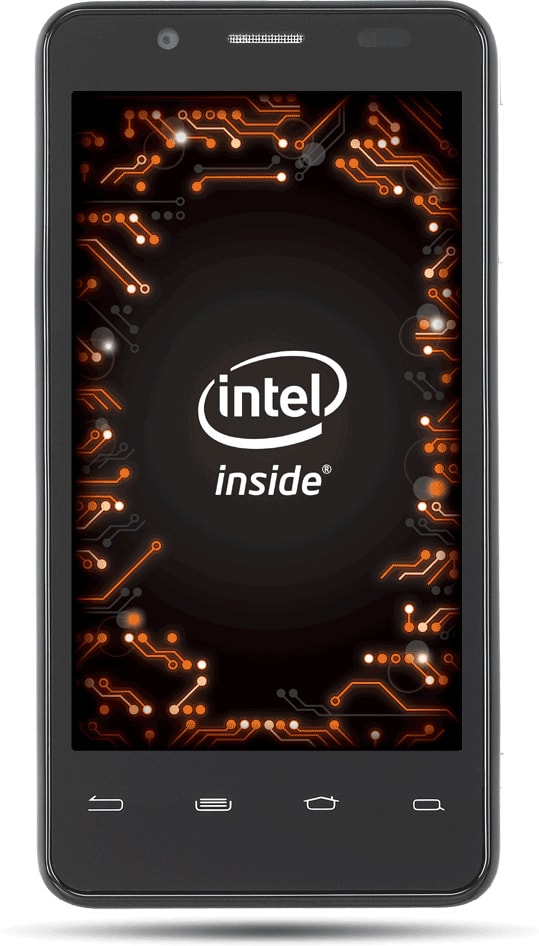 The first generation of Intel-powered Android phones has arrived, and while the chip maker doesn't appear to be claiming that its initial efforts are world-beaters, we've been promised a chipset that prioritizes what people want most: capable web browsing, strong camera performance and robust battery life. Although we've sampled plenty of incremental versions of this Medfield tech, Orange UK's San Diego is the first finished device to land for review. Priced at £200 ($308) it joins a large spread of wallet-friendly, entry-level smartphones in Orange's lineup. With a (1024 x 600) 4-inch LCD, 8-megapixel camera with flash, micro-HDMI port and 1GB of RAM, it looks to be a respectable, if middle-of-the-road, Android device. But the focus here lays with the 1.6GHz Intel Atom Z2460 CPU and whether it delivers on those performance and battery life promises. Does Intel have a handle on mobile processors? Is the San Diego, near-identical to Intel's own reference model, going to be attractive enough for buyers? You'll find our verdict after the break. The first Intel-powered Android phone isn't the greatest, but it's a capable, competitively priced handset that might well pave the way for more impressive devices in the future.

Be the first to review the San Diego?
Your ratings help us make the buyer’s guide better for everyone.
Write a review

Since Mobile World Congress earlier this year, the Orange San Diego (previously known as the Santa Clara), has benefited from some slight revisions. The whole frame is now much more solid, and there's no longer any hint of a creak. The soft-touch backing, while a magnet for scratches and dings, helps to separate it from an army of glossy sub-$300 Android devices, but it's certainly not the most imaginatively designed phone. The shape lies somewhere between the Galaxy S II and iPhone 3GS, although the substantial bezel below the screen stops the phone from being quite as hand-friendly as the latter. It's simply not a pretty phone, and we lay the blame on the ho-hum build materials. The black body is ringed with a silver border, and while it didn't chip during our use, it's not a particularly fancy finish. The 10mm edge houses the volume rocker, micro-SIM slot and two-stage camera button on the right, micro-USB port at the bottom, and mini-HMDI output along the left side. A fiddly power switch resides along the top edge, but once you gain purchase on them, all of the physical buttons are responsive -- including the camera button, which will also quick-launch into the camera.

The San Diego is home to an 8-megapixel / 1.3-megapixel camera duo, both of which can be controlled using either the physical key or touchscreen. The primary, rear-facing shooter is also capable of recording 1080p video. The four capacitive buttons are clearly signposted in daylight, but will also light up if the environment dictates. Thankfully, despite the lightweight tinkering from Orange, both Android Gingerbread shortcuts remain intact, with a multitasking screen accessible by holding the home button. Storage space comes in at just under 11GB -- with no option for expansion. In fact, the whole phone is sealed up -- so there's no easy option to change the battery either. (It is possible to wrench off the back cover, but the battery still isn't the in-and-out kind.)

The San Diego's 4-inch screen was a pleasant surprise. While there's no Super AMOLED Plus or Super LCD 2 fanfare, it's sharp and rich, although wider viewing angles introduce some gentle discoloration. But for a low-to-middle-ranger, the 1024 x 600 screen was plenty serviceable, and at full brightness was just about manageable in full daylight.

While Intel seemed to pride itself on the camera skills of its reference design, we can't agree. If ever there was a phone to demonstrate that a camera's performance can't be measured by megapixels alone, then the San Diego is it. While some effort was made on the software side to ensure the phone is capable of burst capture, we were left underwhelmed by the blurry results. Perhaps we've been spoiled recently, but the image quality certainly doesn't measure up to the standards of other earnestly-priced phones. Colors were often washed out with subjects appearing dull, while less-than-favorable lighting resulted in hefty doses of noise. This time, we won't blame it on the often cloudier climes of the UK as color reproduction indoors was also meager, and a good deal of detail often got lost in translation. Having said that, there were flashes of decent imaging, but these moments were rarer than we'd liked. Performance in macro mode was generally better than other settings. Intel has added a raft of control options for the camera, and while there isn't an HDR mode, per se, you do have the option of capturing a selection of photos at differing exposures to craft your own HDR images on separate hardware. The camera app doesn't cut corners at all on options, with several auto exposure modes (including aperture and shutter priority), shutter-speed adjustment, anti-banding options, RAW mode, ISO settings (800 maximum) and a burst-mode capable of 15 frames per second for up to 10 shots. Unfortunately, the results from the get-go didn't really warrant extensive use of all those options. Video performance matched what we found with stills, with results often noisy and a little rough around the edges. White balance largely did the trick, but it did end up washing out the swan you'll see in our sample. Autofocus kept up with us, although it's not the speediest.

The San Diego runs on Android Gingerbread. We've been told that Ice Cream Sandwich can already run on this hardware, but it still won't be seen on these devices until Q4. It's difficult to describe what's been done to stock Android. For every change Orange made, some parts were left completely unaffected -- like an increasingly rare stock version of the app drawer. We were able to scrape back most of what Orange had wrought -- aside from the dated orange app icons. The carrier did add gesture features, which are largely unobtrusive and occasionally useful. By slowly tracing across the screen (on any app or the home screen) you can draw out a symbol that acts as a shortcut, catapulting you to whatever's assigned to it. We give it a run in the video review -- check that out if you'd like to see how it all works. Up to 27 shortcuts can be assigned to apps, contacts, playlists and even FourSquare places. Popular carrier apps, like Orange Wednesday, are pre-installed and are unfortunately flanked by less useful additions like the Orange Assistant helper app, an additional user guide and an NFC tags app that went largely untouched. While the phone is NFC-capable, there's no "taggable" cards packaged with the phone and the San Diego doesn't hook up to Orange's existing contactless payment service.

The stock Android keyboard felt very, very responsive -- more so than on various other Android devices we've reviewed this year, and Swype is offered as well if that's more your style. As we'll cover more closely in the performance section, the web browser copes well with denser sites -- there's a little stutter but it's on par with existing dual-core Android phones, if not quite on the same level as a flagship. App compatibility on the new chipset was a concern that we almost completely forgot about during our review. We came across only two apps that didn't work during our review and we use a lot of apps -- it simply wasn't a problem.

For Intel, a lot boils down to this section. Our benchmark figures have barely moved since we tested the device at its launch event, and the numbers paint an interesting, largely positive picture. In short, the single-core 1.6GHz Intel Atom Z2460 is capable of sparring with the dual-core masses. Sure, it's not a leader -- it's not even close to the quad-cores and Snapdragon S4s of 2012, but look at that SunSpider score. We've run several rounds just to check, but yes, it slides in just underneath the Galaxy S III -- and less is better here. It demonstrates that Intel was serious when it promised to focus on web browsing. And while the phone was clearly unable to scale 3D environments on the likes of GTA 3 as well as pricier handsets, it still manages to juggle this and other low-intensity tasks without a problem.

Alas, real-world battery life didn't hold up to those heady promises of 14 days' standby. Many people might want a smartphone that can simply exist in their bag for a few days -- but we've reviewed enough devices and tested enough batteries to tell you it's the screen that will burn through your charged-up phone. On our video rundown test, which involves looping a video with the screen fixed at 50 percent brightness, the phone managed to wind down in around seven hours and 20 minutes. That time is no better than current Android devices, but it's still pretty good for a 4-inch smartphone. In day-to-day use, we found the battery fared better, managing closer to two or three days between charges -- substantially better than many other smartphones we've used this year. Unsurprisingly, its runtime is directly related to how much you use it, but if you're not going to use those smartphone features, it will doggedly hold onto its initial charge very well -- close to that posited two-week mark. Call quality was strong -- Orange offers HD voice calling between the San Diego and other compatible devices. It also has the same earSmart voice-cancellation processing found in the likes of the Galaxy S III and, er, Dell Streak, keeping our test calls sharp and clear.

Intel's first Android smartphone proves that the company is more than happy to bring the fight to existing processors. Despite the low price, the admirable performance of the San Diego's Medfield processor is the take-home message here -- which is great news for a manufacturer looking to dip its toes into mobile devices. What we're interested in seeing now is what Intel can make if it really pushes the envelope. How would an Intel-powered, 1080p, flagship smartphone with a more capable camera compare to Samsung's and HTC's best and brightest? In comparison, the San Diego looks plain cheap, lacks Ice Cream Sandwich and has often disappointing camera. If we think globally, the Galaxy Nexus is just $100 more expensive, and represents competition that the San Diego (and its duplicates) would lose out to. However, for this price -- and as Intel's entry-level smartphone gambit -- we were left impressed by both the display and battery. The first Medfield phones may not register on the radar for those looking for the best Android has to offer, but it remains a strong start for Intel to build upon.