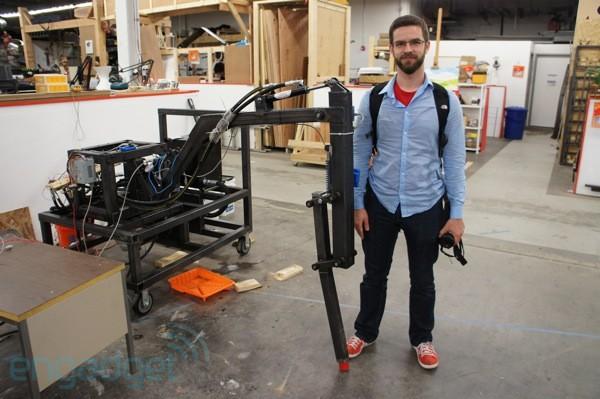 Admittedly, this is one of our shorter editors on staff. But he is, believe it or not, an adult male that stands five foot, eight inches tall. Which puts that giant chunk of metal next to him at about five feet. Turns out, that slab of black steel is a prototype robot leg -- and one that's only half scale. It's the work of a bunch of hobbyists, engineers and hackers at the Artisan's Asylum in Somerville, MA where its the big dog amongst a pile of other amazing projects. This is simply an early stage in the building of what will ultimately be one of the largest six-legged robots in the world, dubbed Stompy. All told some 19 different people are hard at work on the bot as part of an intensive class taught by Gui Cavalcanti, James Whong and Dan Cody at the hacker space that covers everything from metal work, to hydraulics, and, of course, robotics. When it started in April, the goal was to build a fully functional and rideable hexapod in four months time, by breaking down the project into much simpler to tackle tasks. Now the class is gearing up to enter the final stages, namely, building the full scale mechanical monster. When we talked to Gui, one of the co-founders and president of Artisan's Asylum, he said there were still a lot of kinks to work out, but that the project was progressing at a pretty impressive rate. The prototype leg is mounted on a cart, which currently weighs in at about 600 pounds and sports the name Gimpy. Controlling the appendage is no brainless task. There are sensors and microcontrollers at every joint, connected by Ethernet cable, taking readings and passing along valuable data to help guide its motion. One of the keys is a magnetic field sensor that monitors the orientation of the poles attached at each joint. The whole system acts as a loop, with a control node driving the hydraulic valves and moving the leg. The change in position and angle is then read by the sensors and that data is sent back to a computer which then decides what instructions to pass to the hydraulic controller to achieve the desired angle.

Work has already begun on tweaking the design for a full scale model. Ultimately six of them will be connected together to hoist a pair of passengers more than six feet in the air. When completed the two and a half ton steel terror will be powered by the 135-horsepower propane engine you see above and have a leg span of 17 feet across... or about a lane and a half of traffic. Obviously, constructing something of such magnitude will require some serious resources and, while the team has struck some sponsorship deals, they're going to need more than the good will of a couple of companies to get this project (literally) off the ground. The next step is a Kickstarter, where seemingly every good (or crazy) idea goes to get funding now-a-days. Soon enough, anyone with any interest in seeing this thing succeed will be able to throw their money at Gui and his cohorts and, in return, you can take a ride on Stompy, learn to pilot him yourself, or just make the rideable robot crush something for you.

In this article: artisans asylum, ArtisansAsylum, diy, do it yourself, DoItYourself, gimpy, gui Cavalcanti, GuiCavalcanti, hacker space, HackerSpace, hands-on, hexapod, hydraulics, ma, project hexapod, ProjectHexapod, propane engine, PropaneEngine, ridable robot, RidableRobot, robot, robots, somerville, stompy
All products recommended by Engadget are selected by our editorial team, independent of our parent company. Some of our stories include affiliate links. If you buy something through one of these links, we may earn an affiliate commission.
Share
Tweet
Share