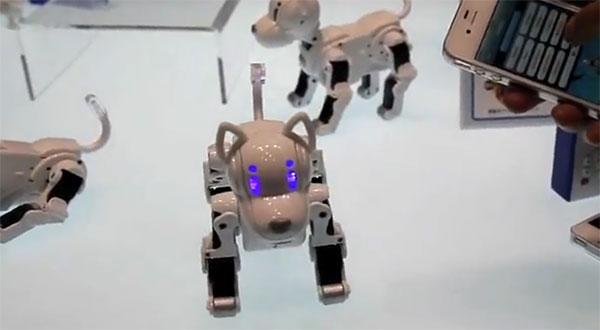 Takara Tomy's i-SODOG might not be as intimidating as other robotic quadrupeds, but it sure is a charmer. Freshly unveiled at the Tokyo International Toy Show, the puppy comes laden with touch sensors, 15 custom servos and a microphone, letting its master command it with up to 50 unique voice cues. The mechanical mutt's mind packs some basic artificial intelligence as well, allowing it to learn and modify its behavior based on the user's commands. If the pup flunks out of digital dog training, however, its owner can always assume control directly with the i-SODOG iOS / Android app or from a dedicated controller. Fido's chasing a Spring 2013 release for 31,500 yen ($400), but there's no word on a release outside of Japan. In the meantime, a video of the plastic pooch in action awaits you after the break.

In this article: Android, app, dog, dogs, iOS, pet, pets, robot, robot dog, Robot Dreams, RobotDog, RobotDreams, robotic dog, RoboticDog, robots, Takara, Takara Tomy, TakaraTomy, Tomy, toy, video
All products recommended by Engadget are selected by our editorial team, independent of our parent company. Some of our stories include affiliate links. If you buy something through one of these links, we may earn an affiliate commission.
Share
Tweet
Share