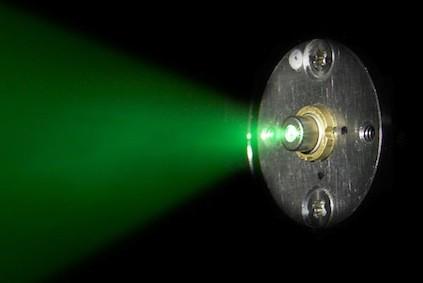 As cool as lasers are, so far there are precious few commercially available display devices available that use them. That may change with this new green semiconductor laser diode announced by Sony and Sumitomo, capable of the brightness necessary to replace the more expensive light sources used to fill in the middle of the RGB setup. According to the two companies, it's the world's first one capable of over 100mW power at 530nm, which they think will make it a fit for both advanced projectors and compact light projectors. Check after the break for more details on how the technology came to be -- drawing heavily on Sumitomo's production techniques and Sony's GaN laser technology developed with Blu-ray -- we'll let you know when there's a LaserVue or REDray setup priced for general consumption.

Sumitomo Electric Industries, Ltd. ("Sumitomo Electric") and Sony Corporation ("Sony") have successfully developed the world's first*1 semiconductor laser diode with an optical output power of over 100 mW in the true green region at a wavelength of 530 nm. This laser diode can be mounted on laser projectors and many other display devices. The new laser diode features twice the luminosity*2 compared with conventional gallium nitride (GaN) green laser diodes, and a color gamut broadened by 182% based on the NTSC standard (CIE 1976 color gamut)*3. As a result, these significantly improve the performance of laser projectors and other display devices to reproduce vibrant video and images.

Red and blue laser diodes have been commercially available among the primary red-green-blue (RGB) colors, but there has been greater need for high output green laser diodes towards the development of high performance laser projectors and display devices. Currently, green lasers are generated by converting the wavelength of infrared laser light from a light source using optical materials, but the light source is large and expensive. In addition, conventional GaN-based green lasers have difficulties achieving sufficient luminosity as their performance is limited to an output power of several tens of milliwatt at a wavelength of 520 nm or less.

The development of true green semiconductor laser diode completes the three basic colors of the RGB laser light sources. Sumitomo Electric and Sony anticipate a wide variety of applications for this technology such as incorporation into advanced laser projectors with high luminosity and broad color gamut, as well as compact, light, energy-efficient laser projectors.

*1: As of this announcement on June 21st, 2012
*2: Comparison with GaN-based laser diodes of 60 mW or less at 520 nm or less
*3: NTSC standard comparison with the combination of the developed true green laser diode and the current red and blue laser diode.

Main features of the development
Sumitomo Electric and Sony have succeeded in the development of the world's first true green semiconductor laser diode that has an output power of over 100 mW at 530 nm by using a semi-polar GaN substrate and improving the production techniques.

Wall-plug efficiency of more than 8%
In GaN-based green light-emitting devices, luminous efficiency declines in the green region due to the internal field effects resulting from distortion in the crystal structure and the resultant internal polarization. It is possible to suppress the internal field effects by adopting semi-polar GaN substrates, but it is necessary to optimize the entire laser production process including structural design, crystal growth, wafer processing, and electrode configuration for their practical use. Sumitomo Electric and Sony have succeeded in reducing the operating current and voltage in the laser through the optimization of the laser structure, impurity control in crystal, and minimization of electrode resistance, and thus achieved an output power of 100 mW and a wall-plug efficiency of more than 8% at a wavelength of 530 nm.

In this article: blu-ray, diode, gan, green, green laser, GreenLaser, hdpostcross, laser, laser projector, LaserProjector, luminosity, pico projector, PicoProjector, projector, rgb, semiconductor, sony, sumitomo
All products recommended by Engadget are selected by our editorial team, independent of our parent company. Some of our stories include affiliate links. If you buy something through one of these links, we may earn an affiliate commission.
Share
Tweet
Share