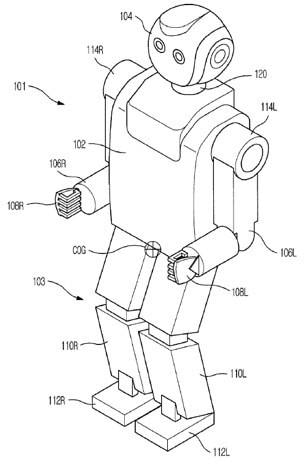 As much as Samsung is big on robots, it hasn't gone all-out on the idea until a just-published quartet of patent applications. The filings have a robot more directly mimicking a human walk and adjusting the scale to get the appropriate speed without the unnatural, perpetually bent gait of certain peers. To safely get from point A to point B, any path is chopped up into a series of walking motions, and the robot constantly checks against its center of gravity to stay upright as it walks uphill or down. All very clever, but we'd say Samsung is almost too fond of the uncanny valley: one patent has rotating joints coordinate to simulate the chest heaves of human breathing. We don't know if the company will ever put the patents to use; these could be just feverish dreams of one-upping Honda's ASIMO at its own game. But if it does, we could be looking at Samsung-made androids designed like humans rather than for them.

In this article: android, androids, application, breathing, filing, gait, humanoid, humanoid robot, HumanoidRobot, patent, patent application, patent filing, PatentApplication, PatentFiling, robot, robots, samsung, uncanny valley, UncannyValley, uspto, walking
All products recommended by Engadget are selected by our editorial team, independent of our parent company. Some of our stories include affiliate links. If you buy something through one of these links, we may earn an affiliate commission.
Share
Tweet
Share