Latest in Android at home 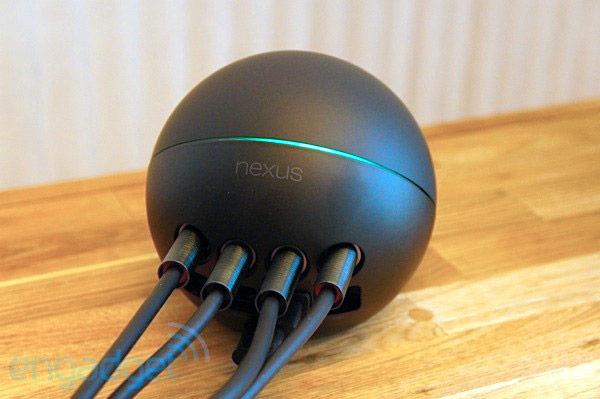 What is the Q? Well, it's a ball... a ball that plays music. And videos. And it also lights up. It's what Google is calling it a "social streaming device" but what's most important is that this is finally the realization of the Android@Home standard that was unveiled last year. While the styling is what'll immediately grab you, it's the functionality that Google thinks will rock your living room. Join us after the break for our first impressions of this category-defying device. The idea is that your friends and family can use their Android devices (because everyone has one, right?) to build up a playlist of music or videos. While it's hard to imagine that being totally commonplace usage, this does at least make for an easy way to get your tunes throughout the house. You can connect to multiple Nexus Q devices simultaneously and send separate media to each of them individually, so this could be easy whole-home streaming.

But, each Q will have to have its own way to connect to the internet, since the content isn't actually pushed from your device, it's pulled from the cloud. Say you've loaded up your new Nexus 7 with the entire Transformers series of movies, as one might be prone to do, all available offline to save your precious data cap. The Q is going to have to download them all again, which could be a problem if you're on a bad connection. But, it will at least sound good, with a 25 watt amplifier built in for those who want to go analog, perfect for those Triad speakers.

You can get digital, though, with HDMI and Toslink outputs on the back of its spherical surface. The top is split, by the way, and can be used like a volume knob. The space separating the two halves meanwhile is punctuated with LEDs that dance and glow during playback. Only slightly distracting.

And then there's the cost. A $299 box ball that, for all intents and purposes, doesn't do a whole lot more than the $99 Apple TV is a tough sell, but we think it's important to point out that this has been designed and manufactured in the USA, which is something of a rarity these days. Will people be willing to pay such a premium for something that looks cooler and is made locally? We'll find out when it ships next month.

In this article: android at home, android@home, AndroidAtHome, google, google io, google io 2012, GoogleIo, GoogleIo2012, hands-on, hdpostcross, media streamer, MediaStreamer, nexus, nexus q, NexusQ, set top box, SetTopBox, social streamer, social streaming device, SocialStreamer, SocialStreamingDevice, streamer
All products recommended by Engadget are selected by our editorial team, independent of our parent company. Some of our stories include affiliate links. If you buy something through one of these links, we may earn an affiliate commission.
Share
Tweet
Share