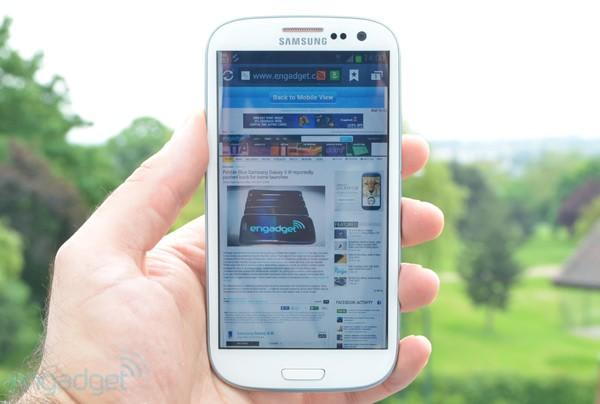 In regards to the Samsung Galaxy S III, Verizon Wireless has been very vague about its "coming weeks" launch window, but it's become much more specific now: July 10, to be exact. The flagship device will be hitting both online and brick-and-mortar stores on that day, though only the 16GB model is going to be in retail stores at first (the 32GB will be available online, but won't get to stores until -- you guessed it -- the "coming weeks"). The phone will come in both white and blue -- the same color selection we've seen on Sprint and T-Mobile. As for pricing, the 16GB version will cost you $200, while the 32GB will be $250. The press release is just below, if you want to check it out.

Customers can take advantage of 4G LTE-optimized apps like Color to share live video broadcasts of life's special moments with their Facebook® friends. Sharing live video with audio is an exclusive feature of the Color app on Verizon Wireless' 4G LTE network. Customers can broadcast real-time footage of a newborn's first step with family members who are miles away or share a beautiful view of a vacation spot to make friends at home jealous. Combining America's largest 4G LTE network with the Galaxy S III's 4.8-inch HD Super AMOLED™ display creates the perfect duo to watch movies, television shows and other video content with apps like viewdini. Viewdini brings the power of Verizon Wireless' 4G LTE network to the screen by streamlining access to videos from a wide range of content providers, including cable operators, websites and other popular video sources. The viewdini app can be downloaded from Verizon Apps and Google Play.

Android™ 4.0 Ice Cream Sandwich
Mobile Hotspot – Share a 4G LTE connection with up to 10 Wi-Fi-enabled devices
1.5 GHz dual-core processor and 2 GB RAM
Share Shot – Create a temporary photo sharing network with a group of friends who are nearby at the same party or event; photos can be taken by any member of the group and shared with the entire group
S Beam – Share pictures, videos, documents and more by simply touching two Galaxy S III devices' backs together
S Voice™ – Featuring natural language recognition, you can control the apps and services used most with words instead of touch
Pop Up Play – Videos can be played in a small window while customers use the rest of the display to complete other tasks such as typing emails, organizing calendars and updating their social networks
Evolved camera capabilities - Burst Shot mode instantly captures 20 continuous shots and Best Photo feature selects the best shot to display
Enhanced camera – 8-megapixel rear camera with zero-lag shutter speed and a 1.9-megapixel front camera so customers can capture pictures and videos of themselves or video chat with family and friends
microSD™ card slot for expandable memory

The Samsung Galaxy S III is available in 16 GB and 32 GB models for $199.99 and $249.99 respectively with a new two-year customer agreement. The 16 GB model will be available in stores and online starting July 10 and the 32 GB model will be available online starting July 10 and will be in stores in the coming weeks. Customers will also have the choice of the Galaxy S III in two colors: Marble White or Pebble Blue. Customers can visit www.verizonwireless.com/galaxys3 for more information on the Samsung Galaxy S III for Verizon Wireless.

In this article: availability, galaxy s iii, GalaxySIii, gs3, gsiii, i535, mobilepostcross, samsung, samsung galaxy s iii, samsung sch-i535, SamsungGalaxySIii, SamsungSch-i535, sch-i535, verizon, verizon wireless, VerizonWireless, vzw
All products recommended by Engadget are selected by our editorial team, independent of our parent company. Some of our stories include affiliate links. If you buy something through one of these links, we may earn an affiliate commission.
Share
Tweet
Share