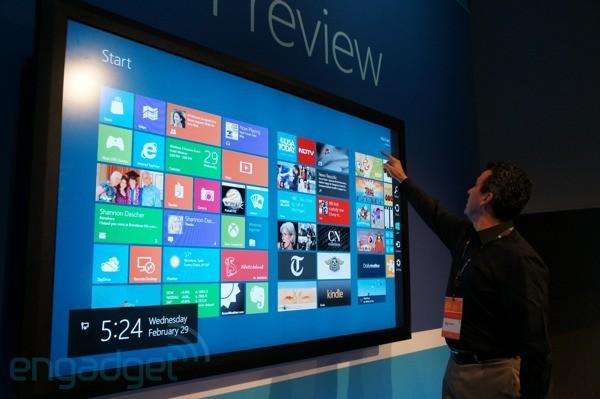 Microsoft has already expressed its fondness for Perceptive Pixel's gigantic capacitive touchscreens, which became apparent during a live demo at the company's Windows 8 presentation at Mobile World Congress earlier this year, but now that friendship has become a bit more official. During Microsoft's Worldwide Partner Conference keynote in Toronto this morning, Steve Ballmer announced that Perceptive Pixel would be coming in-house, with Microsoft acquiring the display maker. The move seems to be in line with the company's recent shift to hardware manufacturing, beginning with last month's Surface introduction and its reinforced commitment to the recently renamed PixelSense smart table solution -- MS has just seized an opportunity to get a bit more hands-on. Full (limited) details are in the press release after the break.

REDMOND, Wash., and NEW YORK - July 9, 2012 - Microsoft Corp. and Perceptive Pixel Inc. (PPI) today announced that they have entered into a definitive agreement under which Microsoft will acquire PPI, a recognized leader in research, development and production of large-scale, multi-touch display solutions.

"The acquisition of PPI allows us to draw on our complementary strengths, and we're excited to accelerate this market evolution," said Kurt DelBene, president, Office Division for Microsoft. "PPI's large touch displays, when combined with hardware from our OEMs, will become powerful Windows 8-based PCs and open new possibilities for productivity and collaboration."

Founded in 2006 by Jeff Han, a renowned pioneer in multi-touch technology, PPI shipped its first multi-touch workstation and large wall solutions in early 2007. In 2008 its technology gained widespread recognition for transforming the way CNN and other broadcasters covered the 2008 U.S. presidential election. In 2009 the Smithsonian awarded the company the National Design Award in the inaugural category of Interaction Design. PPI's patented technologies are used across a wide variety of industries such as government, defense, broadcast, energy exploration, engineering and higher education, and its expertise in both software and hardware will contribute to success in broad scenarios such as collaboration, meetings and presentations.

"We are incredibly excited to be working together on our mutual passion to build technologies that enable people to collaborate and communicate," Han said. "By joining Microsoft, we will be able to take advantage of the tremendous momentum of the Microsoft Office Division, tightly interoperate with its products, and deliver this technology to a very broad set of customers."

Terms of the deal were not disclosed. The acquisition is subject to customary closing conditions, including regulatory approval.

Perceptive Pixel Inc. (PPI) is a recognized leader in interaction design, having pioneered the development of large-scale, unlimited multi-touch devices that came to prominence during the historic 2008 U.S. presidential elections. PPI's advanced multi-touch technology platform enables professionals to get closer to their content, removing barriers to understanding, communication and collaboration. PPI is privately held and headquartered in New York. For more information, visit www.perceptivepixel.com.

In this article: acquisition, acquisitions, display, displays, hardware, manufacturing, merger, mergers and acquisitions, MergersAndAcquisitions, microsoft, ms, Perceptive Pixel, PerceptivePixel, pixelsense, touch, touchscreen, windows 8, Windows8
All products recommended by Engadget are selected by our editorial team, independent of our parent company. Some of our stories include affiliate links. If you buy something through one of these links, we may earn an affiliate commission.
Share
Tweet
Share