HP has been fleshing out its Ultrabook lineup as of late, most recently adding the metal-clad Envy Spectre XT to the mix, but the company is also addressing the lower end of the market with its Sleekbook line, announced back in May. Confusingly, these thin-and-light systems look exactly the same as the new Envy-branded Ultrabooks, except that the Sleekbooks are less expensive -- namely because for one reason or another they don't meet Intel's Ultrabook guidelines. One such notebook, the Envy Sleekbook 6z, stands apart from the Ultrabook fold with an AMD Trinity APU -- a spec that helps keep the starting price nice and low at $600.

That's not to say that all of HP's Sleekbooks ditch Intel processors, but given the choice between and AMD- and Intel-based model we quickly chose the former. After all, the 6z is the first Trinity-powered system we've had the chance to test, so we were naturally curious to see how it stacks up against recent Ivy Bridge machines -- and we imagine you are, too. So without any further ado, let's get to it. 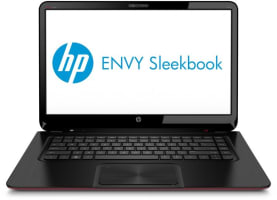 At 4.75 pounds, this laptop isn't a featherweight, but then again, its 15.6-inch display does make it one of the larger thin-and-lights we've seen. With a thickness of 0.78 inches, the 6z walks the line between Ultrabook and mainstream systems. The Dell Inspiron 15R is a fatter 1.18 inches, for example, while the 15-inch Acer Aspire V5 measures in at 0.9 inches. Still, it can't hold a candle to a proper ultraportable like the 15-inch Samsung Series 9, which measures just 0.58 inches. Whatever weight class it belongs in, for a $600 laptop the 6z boasts a pretty sweet design, not to mention solid build quality. The aluminum lid and keyboard deck sport a black, brush-textured finish, while the red soft-touch bottom provides a tasteful pop of color (it makes it pleasant to hold and use in the lap as well). Save for some requisite Beats branding above the keyboard and in the upper bezel, you won't find many embellishments or adornments here. All told, it's one of the more understated designs that HP has unveiled over the past few years.

For a $600 laptop, the 6z boasts a pretty sweet design, not to mention solid build quality.

While whittled-down machines make the best travel companions, we can also sing the virtues of laptops with a little more meat -- as more to love generally equals a larger selection of ports. The 6z includes an Ethernet port, one USB 2.0 and two USB 3.0 connections, HDMI, and an SD card slot, along with your standard headphone out and mic jack. Optical media fans can configure the machines with an external DVD tray for an added fee.

The 6z's recessed, island-style keyboard has a spacious, comfortable layout. The square-shaped keys provide a satisfying amount of travel, though we found that some keys were stickier (i.e., less likely to register our presses) than others. HP could have extended the keyboard a bit on each side to span the width of the laptop, though our fingers didn't have a hard time finding key buttons like Enter and Shift. While we would appreciate a tad more spacing between the keys, they don't feel cramped, and the recessed design feels more ergonomically sound than a flush layout. As it happens, there was no backlighting on our review unit, though it is offered as an upgrade option.

What is it about trackpads that makes them so prone to awfulness? Okay, the Synpatics ClickPad on the 6z isn't atrocious, but considering how often you interact with this part of the system, its shortcomings add up to one very prominent item on our cons list. In general, the trackpad offers too much resistance. While it often didn't register our gestures, though, it sometimes was overly sensitive, interpreting our pinch-to-zoom as a command to magnify text by 200 percent. As with other recent HP machines, too, the built-in button is a bit stiff. It also occasionally mistakes left clicks for right clicks, but for the most part it got them right.

Having a modest resolution of 1,366 x 768 doesn't automatically make a laptop display bad, and indeed, the Sleekbook's LED panel is decent for what it is. Colors on web pages and in video clips look balanced, if not especially vibrant. In a side-by-side comparison with the Lenovo IdeaPad U310, images on the 6z looked bright and crisp, while the IdeaPad's screen takes on a decidedly bluish overcast.

As you'd expect of a garden-variety LCD screen, though, viewing angles aren't exactly superb. Tilting the display more than an inch forward or moving to the left or right of center will cause some serious wash-out, but you could probably host a two-person viewing party without a problem. So no, you're not going to rave about this display, but unless you make a blind purchase, thinking you're getting a premium product, you likely won't be too disappointed.

The 6z is part of the Envy line (heck, it's made by HP) so Beats Audio is naturally on board. And marketing hype aside, that's actually a good thing. The technology offers a much better listening experience than the tinny, canned sound on most other laptops at this price. There's a limit to that boost in audio quality, though -- you won't forget that you're pumping sound through a notebook, and a more budget-priced one, at that. Still, the built-in subwoofer delivers some pleasing bass notes. Above all, though, you might appreciate the sound most of all when listening with headphones -- at least, that's the setup we ultimately preferred.

The dual-core application processing unit is one of the 6z's defining specs, since it's not every day we test a laptop that packs something other than Intel innards. And while we were eager to see how the processor and AMD's Radeon Graphics stack up against Intel-powered notebooks, the 6z's benchmark scores fall painfully short of the competition. The Sleekbook bombed the PCMark Vantage test, scoring almost 5,000 points lower than mid-range systems such as the IdeaPad U310. (In fact, these scores match what HP's own testing team has been seeing.)

The 6z's benchmark scores fall painfully short of the competition.

Anecdotally, the 6z had no trouble handling web surfing across two browsers, music streaming through Spotify and all the typing that went into writing this review. Cold-booting into Windows 7 takes 47 seconds, which should drive home the point that this is no Ultrabook, even though it's sold alongside them on HP's site. You likely won't notice the delta between the APU's performance and higher-powered Ivy / Sandy Bridge chips until you start gaming. In World of Warcraft at native resolution, the laptop managed just 20 frames per second, which is basically unplayable. In Batman: Arkham Asylum, it notched a more respectable 45 frames per second, but you'll have to accept murky, pixelated visuals as a trade-off.

The Sleekbook 6z doesn't offer Ultrabook-like endurance, but it hangs on longer than most mainstream 15.6-inch systems. On our battery rundown test, which involves playing a looped video with WiFi on and display brightness set to 65 percent, the laptop lasted five hours and 51 minutes. That's roughly in line with the five hours HP got on its own video playback test, and it's a better showing than what we've saw from the IdeaPad U310 Ultrabook (4:57) and the HP Envy 15 (4:07), another 15-inch notebook.

Though the 6z carries HP Envy branding, it omits the complimentary copies of Adobe Photoshop Elements and Premiere Elements found on higher-end systems like the Spectre XT and the Envy 14 Spectre. That's not too surprising given this laptop's more budget-friendly price, but -- just sayin' -- it would have sweetened the deal if HP included those programs.

While you won't find those Adobe applications, you will encounter plenty of other software. The 6z comes with heaps of bloatware, including a sickening number of pre-installed games (almost 50), many of which take you to the online HP Games hub and require to you to sign into Facebook. HP also includes its full suite of utilities, such as Application Assistant, Connection Manager and Support Assistant. The 6z includes Skype, CyberLink DVD and a 60-day trial of Norton Internet Security (you'll want to disable the pop-ups after first booting into Windows 7).

We have to say, HP's Sleekbook branding is a bit confusing. The 6z isn't an Ultrabook, but its weight and thickness undercut most mainstream 15-inchers, so your other options will likely be thicker, similarly priced and higher-powered or thinner, higher-powered and much more expensive. If you're looking for a 15-inch Ultrabook, the HP Envy Ultrabook 6t is one of your cheapest bets. Unlike the 6z, it ships with an Intel processor (up to a Core i5 Ivy Bridge CPU clocked at 1.7GHz), but its specs are otherwise similar: 500GB of storage, up to 16GB of memory and an optional DVD tray. The 6t starts at $800, and though it carries the Ultrabook distinction, it has the same weight and dimensions as the 6z -- along with the same aluminum design.

We have to say, HP's Sleekbook branding is a bit confusing.

It's bulkier, yes, but Dell's new Inspiron 15R, tipping the scales at six pounds and measuring 1.18 inches thick, has some more solid specs: a $600 configuration includes a Core i5 Ivy Bridge processor, 6GB of RAM, 500GB of storage and the Adobe Elements and Premiere bundle that was omitted from the Sleekbook 6z. The 15.6-inch Toshiba Satellite C855D is another similarly priced option that adds some weight but offers more features. For $600, you get a Core i3 CPU, 4GB of RAM, a 640GB hard drive and a DVD drive -- all in a 5.4-pound package.

Circling back to HP's new lineup one last time, we think it's worth mentioning that the 14-inch HP Envy Sleekbook 4t offers similar specs to the 6z in a lighter, thinner package (just under four pounds, 0.78 inches), but it trades the AMD APU for an Intel processor; a $750 configuration gets you a Core i3 Ivy Bridge CPU with 4GB of RAM and a 500GB hard drive. If screen size is at all negotiable, you'd be better off shelling out a bit more for this model.

It's pretty clear that HP's new Sleekbook line is targeted toward those who fancy a responsive, high-performing thin-and-light but don't want to shell out a grand or more for an Ultrabook. We appreciate the company's effort to temper features with price, and while the 6z is capable enough to handle your everyday computing needs, the underpowered AMD APU isn't a great performer -- and you can do better without spending much more, as even the Envy Ultrabook 6t starts at just $800. For what it's worth, though, folks who do opt for the Intel-approved version will enjoy the same understated design and comfortable keyboard (and hopefully soon-to-be-refined touchpad), so it's definitely worth looking at HP's Envy line anyway if the performance of this particular unit is the main thing giving you pause.