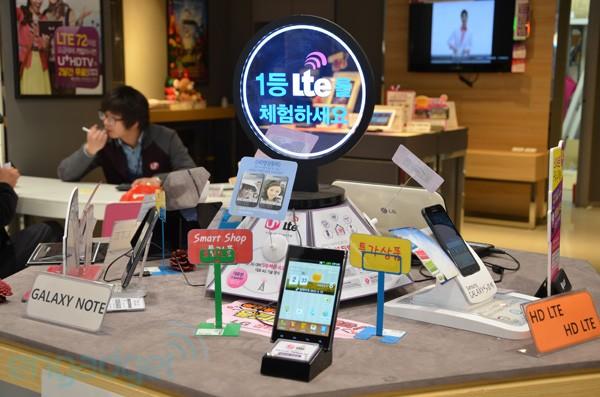 HTC's closure of its South Korean office may seem yet another blow to the company this year, but don't be alarmed: we saw it coming. It's a given that Peter Chou's gang is cutting back in response to its recent weak performance, but the more interesting takeaway here is the fact that the South Korean smartphone market is one tough nut for foreign brands to crack open. Just walk into any carrier shop in Seoul and you'll see the shelves dominated by devices from Samsung, LG and Pantech. If you're lucky, you may spot the odd Sony, Motorola and HTC phones cowering in a corner. So why is that the case? Let's take a look at the how it all started.

You'll be surprised to hear that for a country holding the world's top internet speeds, its smartphone market started relatively late. Before 2010, featurephones were still the norm in South Korea, and thanks to a rule set in early 2005, those devices required a domestic, mostly Java-based middleware called Wireless Internet Platform for Interoperability (or WIPI in short) that standardized network access to ensure fair competition between mobile companies. But really, there's more to this than meets the eye: according to a chart compiled by the Korea Trade-Investment Promotion Agency, the total number of mobile phones sold domestically between 2002 and 2004 declined steadily. WIPI therefore also played a role in letting local companies regain health with minimal threat from foreign players, as the software became difficult and expensive for non-native companies to work with (except for Motorola, whose presence in Korea dates back to 1988). In a sense, this is why Samsung and LG had a great head start on their own turf.

But things began to brighten up for the outsiders when the new government -- under the current president Lee Myung-bak since February 2008 -- made an exception for RIM, thus allowing SK Telecom to start selling BlackBerry devices to business users in mid-2008, followed by the launch of the BlackBerry Bold in December that year. In the same month, the Korea Communications Commission (KCC) announced that it would abolish the outdated requirement by April 2009, in order to freshen up its mobile market. Coincidentally, that April was also when Samsung announced its first Android phone, the i7500 or original Galaxy. LG, who had just made an impressive recovery from its financial crisis in the previous year, took five months to catch up by launching its GW620 QWERTY slider.

However, neither Android device was ready for South Korea in 2009. Back then the local companies made little commitment to Android and were still betting their smartphone future on the mature Windows Mobile, only to be burned by the late arrival of Windows Phone 7. Sure, Samsung also announced Bada at the end of 2009, but it wasn't until early 2011 when South Korea received its first Bada device, the Wave II. This gave overseas vendors a big opportunity window: in January 2010 SK Telecom announced the country's first Android phone, the Motorola MOTOROI. For the entirety of 2010, SK Telecom released 24 smartphones, most of which were powered by Android. That was when HTC, Sony and Motorola got the most attention from the country.

So what about the iPhone? Well, even with WIPI gone since April 2009, there was still one hurdle remaining for Apple: privacy concerns over its devices' location-based services. At the time, manufacturers would've needed to clear such issues with the KCC before offering the products to the South Korean market, but in September 2009 the authorities decided to make things easier and allowed local telcos to obtain permission on Apple's behalf (though obviously someone didn't check thoroughly enough). Consequently, KT started selling the iPhone 3GS in November -- a bold move considering Apple's offering lacked many local phone features, especially DMB (mobile TV) which was, ironically, born in the same year as WIPI. Instead, Korean consumers yearned for the new user experience and the vast App Store on iOS.

The risk paid off. According to Gartner, Apple's chunk of the South Korean mobile market in Q1 2010 was 23 percent. 23 percent! We're talking about a market where Samsung, LG and Pantech typically took up about 80 percent of the market until Apple arrived. About nine months after the launch, KT announced that it had sold over a million iPhones, which made up about half of the network's overall smartphone subscriptions. That's pretty scary considering rival SK Telecom had 2.85 million smartphone subscribers in the same quarter, so good thing it had those 24 smartphones in hand that year.

With all these devices combined, the number of smartphone subscribers in South Korea went from 0.81 million to 7.21 million throughout 2010. By the end of 2011 that figure jumped to 22.58 million. Furthermore, as of May this year smartphones make up 50.9 percent (26.77 million) of the mobile phones in the country, and the KCC predicts it'll reach 54.1 percent (34.8 million) by year's end. LG U+, the world's first carrier to feature full national LTE coverage, is even more optimistic: 40 million smartphones is its guess for 2012.

In the first quarter this year, non-Korean smartphones accounted for only 3.4 percent of domestic mobile phones.

While the overall numbers went up rapidly, things didn't look so good for the foreign manufacturers when you break it down. Gartner reported that in the first quarter this year, non-Korean smartphones accounted for only 3.4 percent of domestic mobile phones. Apple? A sharp drop to a mere two percent; but that's still well ahead of HTC, Motorola and Sony who were at 0.7 percent, 0.4 percent and 0.3 percent, respectively. More worryingly, a quick look at LG U+, SK Telecom and KT's online stores just now found only three non-Korean smartphones still being sold: the iPhone 4, the iPhone 4S and the Motorola Atrix (which was launched with SK Telecom in April last year). It's as if all the foreign vendors bar Apple had long given up on this "emerging" market. Even before this, the range of models offered by these foreign brands were quite limited in comparison to their local counterparts.

Chang Kuk Choi (pictured above), the general manager of LG U+'s mobile device planning team, pointed out the obvious: "Only Apple has succeeded in the Korean market. Others have failed. Korean people don't like [foreign phones]." Choi paused for a moment, and then smiled, "Samsung is number one now." Indeed, Samsung, LG and Pantech currently make up over 90 percent of the Korean mobile market, with MK News claiming Samsung alone reached 66 percent this June. It's not clear what LG's share was, but here's a little insight on the battle of the tabletphones: back in April, we were told that about 3,000 Optimus Vus were sold per day, whereas Samsung's Galaxy Note did between 4,000 to 5,000 per day. It's worth noting that the latter had a four month head start, yet it was still outselling its fresher rival.

But going back to Choi's observation on his fellow Koreans, what's with the hate on foreign phones? One thing's certain: the small players just don't have the money to market their devices over there, whereas Samsung and LG got to get local pop groups to sing and dance about their phones Gangnam style. Another problem is that the foreign companies can't match the after-sales service offered by the local giants, as agreed by a Korean couple I spoke to at a Starbucks in Hong Kong.

When I asked why South Koreans aren't so hot on foreign phones, the boyfriend, holding a Galaxy Note, simply said "Samsung is Korea." And while "LG is always number two," the couple are strong supporters of their national brands, and it appears the same goes with the majority of their country. Such nationalistic pride is no surprise -- there was a time when tens of thousands of South Koreans queued up to donate their jewelry and medals, in order to help bail their country out of the economic crisis in 1998. You don't get this large-scale selfless patriotism anywhere else these days.

Leaving HTC aside, the couple then nodded to the fact that Motorola is "dying" in South Korea, whereas Sony isn't as popular purely because it's from Japan. A few awkward seconds later the man added that he was only joking, but this certainly sheds light on the unspoken cultural tension between the two countries. This becomes more obvious in sports matches that involve both nations, and it only gets uglier when political and historical issues are brought up.

As for Apple, the interest has long waned off ever since the native devices caught up with larger screens, LTE connectivity (a big deal for general video-on-demand and mobile HDTV, according to U+) and shorter product cycles. Oh, and obviously the location tracking fiasco didn't help, either. Struggling to hit the promised target, SK Telecom and KT had to aggressively cut prices for the iPhone 4S shortly after launch last November. We shall see whether Apple's new iPhone -- rumored to launch next month -- will have all the right ingredients to put the company back on track in South Korea. As for the others, it's probably too late.