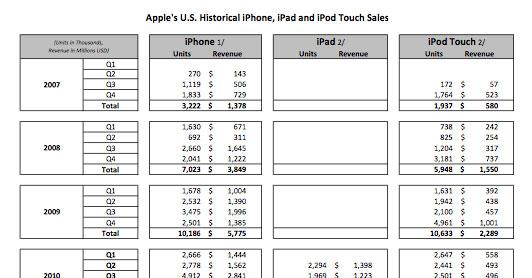 Have a smartphone from Seoul or Cupertino riding in the pocket of your jeans? You aren't the only one. New documents filed in Samsung and Apple's ongoing legal battle reveal specific sales data going back several years, confirming something we always knew to be true: there are a lot of devices out there. Samsung's filing reveals that it has sold 21.25 million "accused" phones and 1.4 million tablets from June 2010 to June of this year, and further breaks down the data by device and, in some cases, carrier. The Galaxy S II, for instance, takes the lion's share of US sales with over 4.1 million units sold between all models and carriers. The Epic 4G makes an appearance at 1.89 million sold, and the Captivate totals in at 1.39 million. Finally, the Samsung Prevail lives up to its moniker by netting 2.25 million in sales, lagging only behind the Galaxy S II -- though its $180 asking price brought in significantly less revenue per unit.

Apple's charts are a bit less specific, detailing the total sales of its iPhone, iPad and iPod Touch lines rather than the sales of each specific hardware iteration -- though where it falters in detail it makes up in numbers. U.S. consumers have snatched up 85 million iPhones since 2007, alongside 34 million iPads and 46 million iPod touch devices -- bringing in almost $80 billion in revenue, collectively. Puts those quarterly reports into perspective, doesn't it? Check out both charts in full at the source link below.

In this article: apple, court, evidence, galaxy s, GalaxyS, iPad, iPhone, iPod Touch, IpodTouch, legal, mimickry, mobilepostcross, patent, patent dispute, PatentDispute, sales, sales data, SalesData, samsung, samsung galaxy s, SamsungGalaxyS, smartphones, tablets
All products recommended by Engadget are selected by our editorial team, independent of our parent company. Some of our stories include affiliate links. If you buy something through one of these links, we may earn an affiliate commission.
Share
Tweet
Share