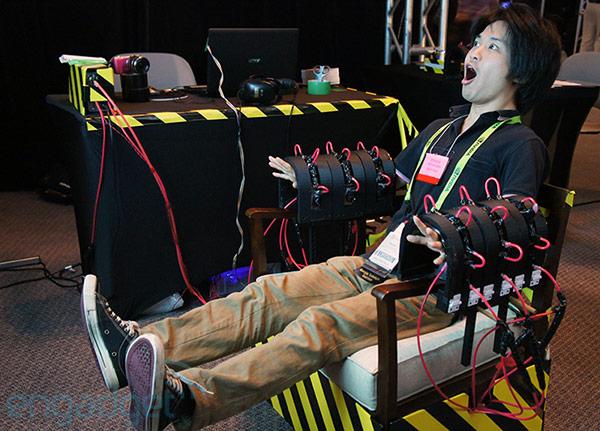 Hiding in the back of the SIGGRAPH Emerging Technologies demo area -- exactly where such a project might belong -- is a dark wood chair that looks anything but innocent. Created by a team at the University of Electro-Communications in Toyko, Chilly Chair, as it's called, may be a reference to the chilling feeling the device is tasked with invoking. After signing a liability waiver, attendees are welcomed to pop a squat before resting their arms atop a cool, flat metal platform hidden beneath a curved sheath that looks like something you may expect to see in Dr. Frankenstein's lab, not a crowded corridor of the Los Angeles Convention Center. Once powered up, the ominous-looking contraption serves to "enrich" the experience as you consume different forms of media, be it watching a movie or listening to some tunes. It works by using a power source to pump 10 kV of juice to an electrode, which then polarizes a dielectric plate, causing it to attract your body hair.

After signing our life away with the requisite waiver, we sat down and strapped in for the ride. Despite several minutes of build-up, the entire experience concluded in what seemed like only a few seconds. A projection screen in front of the chair lit up to present a warning just as we felt the hairs jet directly towards the sheath above. By the time we rose, there was no visual evidence of the previous state, though we have no doubt that the Chilly Chair succeeded in raising hair (note: the experience didn't come close to justifying the exaggerated reaction you may have noticed above). It's difficult to see how this could be implemented in future home theater setups, especially considering all the extra hardware currently required, but it could potentially add another layer of immersion to those novelty 4D attractions we can't seem to avoid during visits to the amusement park. You can witness our Chilly Chair experience in the hands-on video after the break.