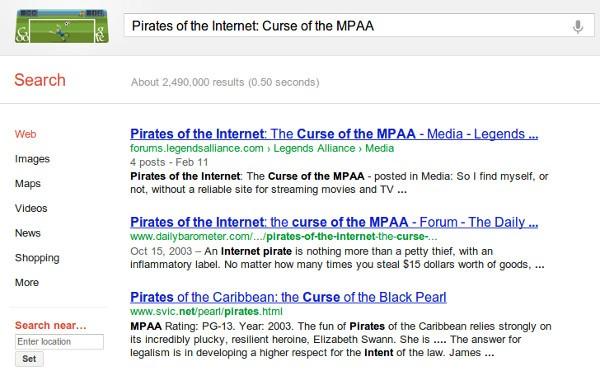 Google has been dogged by claims that it facilitates the piracy of content through its search results pretty much since day one. Starting next week, the web giant will be taking a much more aggressive approach to sites hosting pirated material by downranking frequent offenders. The new results algorithm will take into account the number of valid copyright notices received against a site and penalize them appropriately in the rankings. Google says that this will allow consumers to more readily find legitimate sources of content such as Hulu and Spotify, but it's hard not to see the move as one intended to appease studios, content producers and government officials that routinely threaten to hammer companies like Google with lawsuits and restrictive legislation. Mountain View was also quick to highlight how responsive it's been to industry concerns -- citing the fact that it receives and processes more copyright complaints in a day than it did in all of 2009 combined. For more details, hit up the source link.

Update: The MPAA has issued the following statement from Michael O'Leary, Senior Executive Vice President for Global Policy and External Affairs, in response to Google's move:

We are optimistic that Google's actions will help steer consumers to the myriad legitimate ways for them to access movies and TV shows online, and away from the rogue cyberlockers, peer-to-peer sites, and other outlaw enterprises that steal the hard work of creators across the globe. We will be watching this development closely – the devil is always in the details – and look forward to Google taking further steps to ensure that its services favor legitimate businesses and creators, not thieves.

In this article: Google, mpaa, pirate, pirated media, PiratedMedia, ranking, search, search ranking, SearchRanking
All products recommended by Engadget are selected by our editorial team, independent of our parent company. Some of our stories include affiliate links. If you buy something through one of these links, we may earn an affiliate commission.
Share
Tweet
Share